Wilbarger County residents saw between five and eight inches of snow fall Sunday, and drifts over a foot deep from high winds.
Some roads, especially dirt county roads, were impassable. That prompted Vernon ISD to cancel school on Monday. After assessing the roads again Monday, the district decided to close school again on Tuesday.
Vernon Police Captain Wayne Hodges reported that there were no major issues with accidents in Vernon. However, just to the west, in Hardeman County, U.S. 287 was closed for several hours on Sunday due to multiple accidents involving semis.
Vernon City Manager Marty Mangum reported that the city had emergency shelter available for possible stranded motorists, but none were used.
Just two accidents were reported on Friday and none Saturday through Monday midday. An accident occurred at 3700 block of 287 southbound at 1:19 p.m. Friday DPS reported another accident, at 5:14 p.m. in Oklaunion.
Other areas fared worse. By early Sunday afternoon, the Texas Highway Patrol had reported several multi-car pileups in West Texas, including one that involved 25 vehicles and shut down a portion of Interstate 20 westbound.
The Oklahoma Highway Patrol said a portion of the Turner Turnpike was shut down due to a multi-vehicle accident, while the Oklahoma Department of Transportation said the southern corridor of Interstate 35 was mostly snow packed in the left lane and conditions were expected to deteriorate. 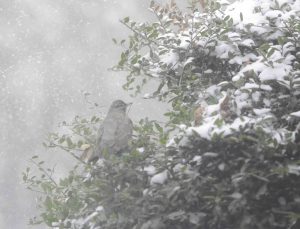 RECORD COLD
The prolonged near and below zero temperatures caused more troubles. Pipes froze and burst. A major city pipe broke Monday and partially flooded one lane of Wilbarger Street for more than a mile.
Statewide, the state’s overwhelmed power grid throttled into rotating blackouts that are typically only seen in 100-degree summers. Parts of Hardeman County to the west, and Iowa Park to the east of Wilbarger County were without power for mre than 24 hours Monday and Tuesday.
Hardeman County Emergency Management reported Tuesday that power in Quanah may not be restored until Thursday — and shelters were open for those without power.
That came after Texas’ electric grid operator lost control of the power supply Monday morning as 4 million Texas households didn’t have heat or other electric appliances working at home as a massive winter storm delivered freezing temperatures across the state.
When the state’s grid operator, the Electric Reliability Council of Texas, began implementing rolling blackouts at 1:25 a.m. Monday, the outages were intended to be implemented on a rolling basis — up to 45 minutes per affected area, according to the ERCOT.
Instead, some Texans in Austin, Houston and other cities were without power into Tuesday afternoon — with warnings it may not be restored for two more days in places.

“This weather event, it’s really unprecedented. We all living here know that,” said Dan Woodfin, senior director of system operations
at the Electric Reliability Council of Texas. He defended preparations made by grid operators and described the demand on the system as record-setting.
“This event was well beyond the design parameters for a typical, or even an extreme, Texas winter that you would normally plan for. And so that is really
the result that we’re seeing,” Woodfin said.

MORE SNOW COMING
Wilbarger County is again under a Winter Storm Warning heading into Wednesday. The National Weather Service advises total new snow accumulations
of 4 to 8 inches are possible. Plan for another period of dangerous travel conditions.
A rapid warm-up is expected to follow with temperatures above freezing on Friday, and into the 60s next week.