The National Police Canine Association’s District 25 K9 Patrol, and Detection Field Trials, and narcotics certification will be held this week in Vernon. Police Chief Randy Agan said they are expecting at least 35 dogs to be in Vernon, but up to 80 could show. The field trial part of the event will be held Monday and Tuesday at Vernon Football Stadium and will be open to the public, starting at 9 a.m. and it is free to attend. 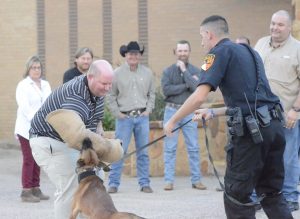 “I think it is going to be a great time. I want everyone to come out and see what they can see. There is some stuff we’ll go through that the public will not have access too, like narcotics trafficking. But the agility courses, and watching them hunt people down, you’ll really like that,” Chief Agan said.

“We’ve received donations from businesses to supply trophies for the event,” Chief Agan said, adding that K9 officer Quinton Hall had worked really hard to put the event together.

Chief Agan said the event is to certify patrol and narcotics dogs to meet national and state qualifications.

Officer Hall said that is possible that some military dogs may also be at the event to do explosives.

“This is a good deal for Vernon,” Chief Agan said. “It’s going to be an exciting week. We also have the Texas Municipal Police Officers Association going to come out and cook and provide meals for all of the participants.”