An attempted armed robbery of a Vernon pharmacy led to a high speed chase across Wilbarger County last Wednesday.

Richard Vernon Fox, 38, of Clancy, Montana, was booked into the Wilbarger County Jail on felony charges of aggravated robbery and evading arrest with a motor vehicle. He is still being held on bonds totaling $70,000.

The incident began at around 8:33 a.m. Wednesday when Vernon Police Department officers were dispatched a pharmacy on Hillcrest Drive. 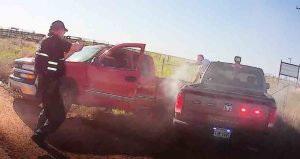 Wilbarger County Sheriff Brian Fritze exits the window of his wrecked patrol vehicle with gun drawn while Vernon Police Officer Danny Morgan orders a suspect to exit the vehicle, following a high speed chase and armed robbery attempt in Vernon on May 5, 2021.Vernon Police reported that officers were dispatched in reference to a male subject, in a 1999 red Chevrolet extended cab pickup, who was in the pharmacy drive-thru threatening workers with an explosive device while demanding prescription medicine and money.  The suspect, Fox,  reportedly became agitated by the time it was taking to meet his demand and drove from the scene, with Vernon Police and Wilbarger County Sheriff Office personnel spotting the suspect vehicle in the 3400 block of 287.

The chase allegedly included Fox driving his vehicle the wrong way in the southbound lanes of U.S. 287 — forcing oncoming traffic, with a posted speed of 75 mph, to take evasive action to avoid front end collisions. Fox then drove off the highway back over the median and onto Hillcrest Drive.

The chase ended when Wilbarger County Sheriff Brian Fritze used his patrol truck to force the suspect vehicle off the road eight miles south of Vernon on U. S 183.

“He was playing chicken with other cars, forcing them off the highway into the ditch,” Sheriff Fritze said. “When he started to turn back around and head back into Vernon, I made a decision to end it, he wasn’t going to go back and do that again through town. It’s just the Grace of God that he didn’t kill anyone.”

The investigation  is on going and additional charges are pending.

This a condensed version of a story, See the online and print edition for more details. 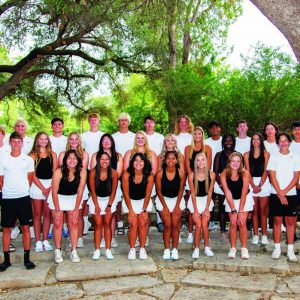