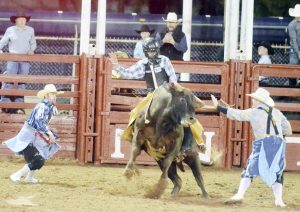 The 75th Santa Rosa Roundup wrapped up Saturday. Some 43 competitors competed in bull riding with just five holding on for the full eight seconds. Lukasey Morris turned in the top ride with a score of 82 on Record Rack’s High Bender during Wednesday night’s action. Morris completes his winning ride (above) while bullfighters Wacey Muncell and Alex Phillips move in to help Morris dimount. Daniel Walker/Vernon Record

The 75th Santa Rosa Roundup, which wrapped up its 4-day run on Saturday, featured sold-out crowds, record numbers of contestants, and perfect weather in the 70s each night.

Organizers stated that it was believed to be the best attended Roundup since 1969. The rodeo also included 514 competitors chasing  nearly $60,000 in prize money.

Wednesday opened with the grand entry and introductions, followed by the Santa Rosa Palomino Club presenting the colors to a standing ovation.

Eleven riders took their turns atop the bulls that night. Three competed rides, with Lukasey Morris turning in the top ride with a score of 82 on Record Rack’s High Bender. The score stood as the top ride of the 4-day event and Morris, of Union City Okla., took home the top prize of $1,639.14.

The same night, the rowdy crowd got to see a Vernon College alum, Isaac Diaz, ride last in Saddle Bronc. He didn’t disappoint, as he rode Regulator across the arena directly in front of the grand stand for a score of 84. It held up as the top score overall out of 37 entries and earned Diaz a prize of $1,349.47. Diaz also won the event here in 2017.

Team roping saw a 4.8 put on the board by Manny Equsquiza and Kory Koontz. The time held up all four nights among the 108 competitors for a prize of $2,291.72.

The top ride in barrel racing on the night went to Kassie Mory at 17.52, which was 10th overall out of 148 entries.

Cheyenne Wimberly had the top barrel race time on the night at 17.49, taking 7th place overall. The top time in the barrel race had been put up in slack of Tuesday by Tayla Moeykens at 17.19 seconds. She earned $2,278.56 for her effort. Barrel racing saw 148 entries compete this year at the round-up.

There were 12 bull rides on Thursday night with Casey Fredericks  turning in an 81 on Trans Am. That score ended up third overall.

Dawson Gleaves turned in an 81.5 on Code Red as the only one of eight bull riders to complete a ride Friday. He finished in second place overall.

Tyler Pearson had the top steer wrestle of Friday night with a time of 4.4 seconds for fifth place overall among 50 entries. The top times had come in during slack on Tuesday by Cody Devers and Don Payne, both with 3.7 seconds.

Saturday’s finale saw a huge crowd, with a line of cars stretching miles from Vernon all the way to the arena five miles south of town — and the entries didn’t disappoint.

In the next event, steer wrestling, Stockton Graves  finished his go in 4.0 seconds, good enough for third place overall..

Saddle bronc saw back-to-back high scoring rides from Cash Michael Wilson with an 82.5 and Brody Wells with an 80.5. Those finished the rodeo second and fourth overall.

Wyatt Muggli finished tie-down roping with a time of 8.7, and that took first overall out of the 98 competitors.