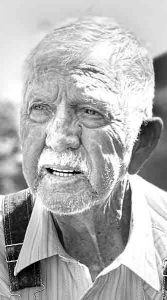 of Goodlett, passed away Saturday evening, June 26 in Crowell. A graveside service will be held at 11 a.m., Wednesday, June 30 at the Goodlett Cemetery, under direction of Smith Funeral Home. Visitation with family will start at 10 a.m. at the graveside. Rev. Monte Lumpkin will offi ciate.Jerry Don Brandon was born April 14, 1937, in Quanah, Texas to the late Ernest James and Willie Ola (Barbee) Brandon. He married Peggy Logan on December 22, 1955 and enjoyed 53 years of marriage before her death in 2009. Jerry was a farmer, rancher, and commercial harvester. Jerry was a lifetime resident of Hardeman County, and was involved in several local organizations. He was a valuable asset to the Goodlett Community and took great pride in being on the board that organized the Goodlett Cemetery Association. Jerry was a member of the Goodlett Methodist Church, and later First United Methodist Church in Quanah.Survivors include his four children: daughter, Kay (Gerri) Steffen of Cuba, Missouri; son, Anthony (Jana) Brandon, of Quanah; daughter, Jana (Darell) Kennon of Vernon; and Deric Brandon of Quanah; 10 grandchildren; and 10 great grandchildren.He was predeceased by a half-brother, W.I. Craven; 3 sisters, Robbie Golston, Margie Alexander and Lajuana Hilliard.The family requests memorials be made to The Goodlett Cemetery Association, 951 FM 2363, Quanah, Texas 79252Jerry