William (Bill) Willis, 91, passed away Tuesday, June 15, 2021 in Wichita Falls. Bill was married for 61 years to Lois Grubbs Willis. A memorial service was held at Hampton Vaughan Crestview Funeral Home on Tuesday, June 22 at 2 p.m.Bill was born August 2, 1929 in Christoval, Texas in a tent, to Rose Lee and Ray Edgar Willis. As 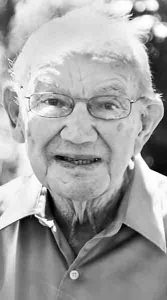 a child of the depression, he worked his first job selling newspapers on the street corner at five years old. Bill attended Vernon schools where he excelled in football, basketball, and track. He attended North Texas State University before beginning his career in the oil industry. Bill enjoyed many travels while working as a data engineer for Dresser Industries. He often told his family of fishing stories while working in pre-Castro Cuba. After retiring in 1981, Bill returned with his family to Vernon, Tx. where he worked for Wilbarger County. After his retirement from the County, Bill worked for H&H Electric until he and Lois both retired in 2008. They then relocated to Wichita Falls to be closer to their grandchildren. Throughout his life, Bill delighted in many types of music, loved to dance, appreciated a good football game, and enjoyed a round of golf; though he would tell you he never mastered the game, Bill shot a hole in one at the Hillcrest Country Club in 1973. Salvation and fellowship were very important to Bill; He was heavily involved in Lions Club and the J. Carl Smith class at First Baptist Church, Vernon. Bill stated that his proudest moments were his marriage to Lois and the birth of his daughter, Stephenie. Bill is survived by his wife, Lois; his daughter, Stephenie and husband Keith Koontz; his grandchildren, David Koontz and wife Emily, William (Billy) Koontz and wife Lacy, and Katy Beth Henderson and husband Jeff; his great grandchildren, Marshall, Ciara, and Penny Jo. Bill was preceded in death by his father, Ray; mother, Rose; and sister, Evelyn.Memorials may be made to Vernon Lions Club or the J. Carl Smith Sunday school class of First Baptist Church, Vernon.