Senator Charles Perry held a town hall meeting in Vernon earlier this month, in advance of the special session. The town hall was held at the Wilbarger Auditorium was attended 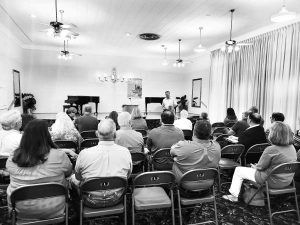 by about 40 people. The state representative was also planned to be at the town hall, but he did not attend.

Sen. Perry discussed that he was proud of the session’s action regarding pro-life legislation and 2nd Amendment bills.

He said there were also concerns, from the winter storm in February that were not addressed.

“We were less than 10 minutes from burning down our grid. This is not a sound bit or a scare tactic, we were literally within 10 minutes of having generators burned to the ground. If that had occurred, we would have been out of power, most say months, I say years,” Perry said. “That would have been a crisis we could not have overcome. The idea we not do nothing to the grid going forward is not an option. We did some good reform, but I’m one of the few screaming we need to increase capacity.”

Perry said that in 2011, Texas had 10 to 12 percent generating capacity in reserve.

“Because of growth in Texas without adding capacity, I’m told it’s about 4 percent now. That’s too skinny to run a state this size. I’m going to continue to be a barker. We still have not had the conversation to have more capacity in reserve.”

Perry said a big loss was win Gov. Abbott vetoed a bill, HB 2667, that was passed. It would have reformed a universal service fund to provide broadband assistance to high cost rural. Perry said the bill passed 30 to 1 in the Senate and had almost universal support in the House. He said that rural Texans internet bill “on the verge of going up more than you can afford” without the economic incentive the bill provided to providers such as Santa Rosa. He urged those in attendance to contact the governor’s office to revisit the issue.

Wilbarger General Hospital CEO Tom Siemers asked Perry about his position on the state proving reimbursement for the treatment of undocumented aliens. Siemers said: “We had one last year, undocumented for 20 years. The person had had a stroke and was admitted to the ER. There was no, nobody would accept this patient. So we cannot transfer him anyplace because no one would take him. I mean I called Washington trying to get some help, but the bottom line was it’s the hospital’s responsibility and he’s going to have free lifetime care because there was no place to transfer, and no one would accept him. I’m just wondering, if you guys talked about that because that’s an offshoot of the border policy?”

Perry responded: “Basically is there any relief to an undocumented taking residence in a hospital system and no insurance obviously, and no capacity to pay privately and becomes a burden on the system. Let’s make it clear under emergency blah blah federal act, if you show up in the ER, no matter your status, they don’t have the right to know your status, anywhere in the country, you can not be denied care. The challenge is once it moves past ER to chronic or permanent care issues, there is no system out there. It is part of the unreimbursed cost of the healthcare system,” Perry said. “I’m going to tell you politically, there’s no desire to accommodate that.  That’s kind of a tragic statement but we don’t want to encourage. If you put out the free food bowl, people are going to come. … I would ask this, is that a one off that you’ve got?”

“Actually, it is the second one we’ve had,” Siemers responded.

“I will say this, there’s an opportunity to have a conversation, if you think it’s just down in the valley or in Houston, it’s all the way across the state. There may be money from the Feds, we may be able to get that covered by the Feds, because it’s their problem they created. That’s a conversation that needs to ensue. We haven’t had that yet,” Perry said.

Sheriff Brian Fritze asked Perry to speak on the state opening up more mental health beds for inmates. “Right now in my jail I’ve got three of my five special holding cells taken up, for seven months now, waiting on MHR beds. And we’ve got zero movement on it,” Fritze said. “We’re running at max capacity a lot of the time. We’re having to call the department and say we can’t take any.”

“It’s been a problem. It’s been a problem for 10 years and I’ve been screaming at the top of my lungs,” Perry responded. He said that $1.7 billion has been spent on mental health beds in the metro areas of Dallas, Houston and San Antonio, but he wants to see the money spent in west Texas. “My goal is to get transport within three hours or less. We’re not that far off if we can just get a $100 million bucks. A $100 million out here fixes everybody’s world.”

Another question was asked if the state was looking at moving the rural state hospitals to urban areas.

“I have not heard that at all,” Perry said, adding that on the contrary, there was a movement to invest in the rural facilities. He added that if there is a problem at the hospitals getting and keeping employees to ensure safety and treatment, than that needs to be another conversation.

Perry also took questions on the special session, redistricting, critical race theory, the PUC, Chapter 313’s for schools districts, and the State Board of Plumbing Examiners regarding the Sunset Act.