The Lions will host the Holiday Eagles on Friday at 7 p.m. Tickets are not available at the gate, they must be prepurchased. Click here to purchase tickets.

After playing back-to-back games against higher division 4A-DI foes, the 4A-DII Lions step down two divisions to play the 3A DII Eagles, but they may well be facing their toughest opponent so far. The 2-0 Eagles are ranked in the 3A-DII top 10 at No. 6 and have dispatched Vernon’s district foe Iowa Park by a 20-14 score in the season opener 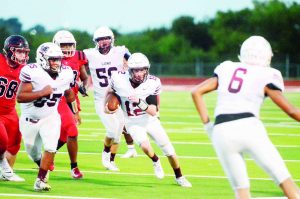 “We’ve got our hands full. Coach Johnson has them playing excellent football. They are tough, solid. They don’t really have a weak spot. Most people will probably pick them, and that’s all right. I don’t mind being the underdog,” Coach Kevin Sherrill said.  “It will give us, in an indirect way, an idea of how we stack up with Iowa Park.”

Vernon holds a 2-1 series advantage as the teams have only met three times. Holliday beat Vernon 19-10 last season, in a game where the Lions’ offense failed to dent the endzone, scoring only on an interception on defense and a field goal. The Lions held Holliday to 160 yards, led in the 4th quarter, but gave up a muffed kick and a safety to lose.

“They love to bring the heat, bring pressure on defense,” coach said. “On paper we may be the underdog, and over-matched by their defense but that’s why you play the game. We didn’t score against Gainesville last year either. We’ll be ready, I can’t say if we ‘ll have another defensive game like last year, but I expect our defense to improve from last week. And I expect our offense to try and exploit match ups were we fell we may have an advantage.”

Vernon beat Gainesville 52-41 last week after falling to the 4A-Division I Leopards 14-0 last season. The Lions’ offense did not punt in last week’s game and Vernon also scored on a kickoff return and a defensive fumble return for a touchdown.

“(The Gainesville game) was certainly a much different game than last year, a defensive slugfest. Friday I was pleased with our offense in general,” Coach Sherrill said. “Our defense was horrendous, but they didn’t give up. The takeaway for me, and what I am most proud of, was that our kids kept playing, they didn’t give up.”

Coach Sherrill said the Lions defensive woes were caused because they struggled with tackling t two very talented Gainesville backs, and that’s something that has to be fixed if Vernon wants to win against Holliday. “They were hard for us to get our hands on and bring down. We really focused on (tackling) in practice (Monday).”