On Sunday Sept. 26, 2021, the Vernon Musicians Club will celebrate a momentous occasion: the club’s 100th anniversary. A party will be held that afternoon from 3 p.m. to 4 p.m. in the Forum Room of the Wilbarger Auditorium. 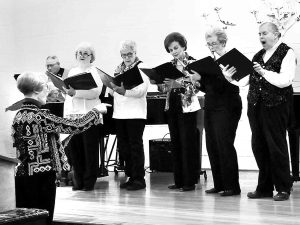 A chorus of Musicians Club members performing.   Members of the chorus include Chyrlon Stroud, Sharon Browning, Jean Clark, Shirley Corbin, and Diane More. They are directed by Vicki Pennington and accompanied by pianist Elgy Smith and bass guitarist Ray Leasure. The Musicians Club will celebrate its 100th anniversary on Sept. 26. A party is planned that day from 3 p.m. to 4 p.m. in the Forum Room of the Wilbarger Auditorium. Refreshments will be served at the come-and-go affair. The public is invited to attend.

Refreshments will be served at the come-and-go affair. The public is invited to attend.
In January, 1921, four members of the Methodist Church choir met in the studio of Miss Enid McCarroll, a local piano teacher, to prepare some church music.
These women, in addition to Miss McCarroll, were Mrs. Kinney, Mrs. P.W. Hendricks and Miss Bonnie Works.
The ladies expressed a need for a music club in Vernon, an idea which soon developed into action and the Vernon Musicians Club was organized with Miss McCarroll as temporary chairman.
Officers elected were Mrs. W.N. Stokes, president; Miss McCarrroll, vice-president; Miss Verna Lucky, secretary-treasurer and Miss Thelma Smith, reporter.
Due to ill health Mrs. Stokes resigned as president before the Fall meeting and Miss McCarroll became president.
The club was affiliated with the National Federation of Music Clubs in 1923. One of the first functions of the new club was to organize a choral group, with Mrs. Christian as director.
In 1928, the organization sponsored a music education program for the schools of Vernon with Mrs. W.P. Thomas employed as supervisor.
First meetings of the Musicians Club were held in homes of the members. The club was instrumental in the building of Yamparika Clubhouse where meetings were then held until Wilbarger Auditorium was completed and the Forum Room was designated for club meetings.
Being a very active and enthusiastic group, the club purchased two grand pianos for the auditorium, one for use in the Forum Room and a concert grand piano for the main stage. Another was purchased for the Empire Room.
These significant contributions were made possible through several projects and fund raisers, including a series of piano festivals held each spring.
As many as fourteen pianos were arranged on the stage for these performances by students, with as many as two or three seated at each piano.
Adults, both men and women, also participated in the programs, which were directed by local piano teachers.
The Musicians Club continued to provide and promote musical programs in the community. With the inception of Community Concerts, the club became
a strong supporter of that organization until its discontinuance.
For many years the club has provided scholarship awards each Spring to graduating seniors who planned to continue their music education.
In recent years the club has offered an essay contest in two age divisions: middle school and high school. Open to students from both public schools and home schools, monetary prizes were award to the winners in each division.
The Musicians Club has been a member of the Forum Club and the Vernon Council of the Arts, as well as the National and Texas Federations of Music Clubs.
Although many members are musicians and performers, it has never been a requirement for membership.
The 2020-2022 officers include Cindy Woodard, President; Betty Canada, First Vice-president; Shirley Corbin, Second Vice-president; Sheila White, Secretary/Reporter; Ray Leasure, Treasurer; Vicki Pennington, Parliamentarian; Diane Moore, Historian; and Jean Clark, Counselor.

The club currently has two members elected to honorary lifetime membership: Penny Shelton and Virginia Kieschnick.
Due to a declining membership, the Vernon Musicians Club will be disbanded at the end of September 2021.
Although the club will no longer exist, the lilting notes of its 100-year legacy will be a sweet song in the memory of its members and the community.