A Wilbarger County jury of seven women, and five men, took about one hour on Friday to convict Robert Thomas, III, 26, of Vernon, of capital murder in a case that occurred in May of 2017. Thomas was sentenced by 46th Judicial District Judge Dan Mike Bird to life in prison without parole in accordance with the verdict.

The case involved the murder and robbery of Jerry McBride, a Vernon business owner who operated an establishment called the Cowboy Club in north Vernon. In the early morning hours of Saturday, May 20, 2017, McBride was gunned down as he was closing up his establishment at around 1:50 a.m. According to eyewitnesses, the robber entered the club with a bandana covering his nose and a cap pulled low over his face. He then began shooting at McBride hitting him eight times before reaching into his pockets and taking his money. On the date of the crime, an eyewitness inside the bar identified someone other than Robert Thomas, III, as the perpetrator of the crime. That person, Charles Harvey Bryant, was initially charged with the offense, but District Attorney Staley Heatly later dismissed the charges against Bryant and charged Thomas and co-defendant Ronald Fanner with the killing.

“When you put all of the pieces together, the evidence against the defendant was overwhelming,” stated Heatly. “We had independent evidence like phone records and forensic evidence and testimony from witnesses who observed Thomas before and after the murder that indisputably linked the defendant to the crime.”

According to Heatly, faulty eye-witness identification is one of the leading causes of wrongful conviction in the country. At trial, the defense team of Michael Valverde and Mark Barber of Wichita Falls attempted to point at Bryant as the killer, urging the jury to believe the eyewitness. They also presented witnesses who testified that in and around the time of Jerry McBride’s murder, Bryant had been seen trying to sell multiple firearms to people in Vernon. In 2019, Bryant was tried and convicted by a Wilbarger County jury of unlawful possession of a firearm related to those events.

While the .45 caliber pistol used in the murder at the Cowboy Club was never recovered, Heatly noted that the shell casings and bullet fragments collected at the scene turned out to be key pieces of evidence. In 2019, Heatly’s office received information that Thomas had been involved in a shooting at the Club Majestic in Wichita Falls that occurred in July of 2016. An eye-witness stated that Thomas fired several rounds in the parking lot at that location. As part of their investigation, the Wichita Falls Police Department collected several spent shell casings and bullet fragments at the scene of the shooting at the Club Majestic. Texas Ranger Jake Weaver submitted the shell casings and bullet components from both crime scenes to the DPS lab for comparison. A forensic analysis showed that the rounds at both the shooting at the Majestic Club and the Cowboy Club were fired from the same unknown .45 caliber pistol.

The trial opened last Tuesday with a jury selection from a pool of nearly 300 candidates. The jury was seated after 6 p.m. that night and the trial began Wednesday morning. The first witness called by the prosecution was Vernon Police officer Wendell Smith. He was the first of six called that day, which also included the defendant’s ex-girlfriend. Eight more witnesses were called on Thursday.

The defense tried to sow doubt into the identity of the shooter. 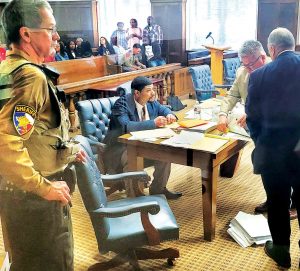 Defendant Robert Thomas III (seated) confers with his legal team Michael Valverde and Mark Barber during a break in testimony as part of the murder trial in the 46th District Court on Thursday, Oct. 13, 2021.
Daniel Walker/Vernon Record

On Friday, after closing, arguments, the case went to the jury, who returned a verdict at around 6 p.m.

According to Heatly, the case was cracked thanks to the hard work of the Vernon Police Department and the Texas Rangers in 2017, 2018, and 2019 when they followed up on numerous leads related to Thomas. “I also have to commend the incredibly hard work of my investigator

Jeff Case and Assistant District Attorney Jon Whitsitt. They worked many hours of overtime on this case during the investigation phase and during trial preparation.”