Friday was a rough day for area firefighters.

The day’s event started for Vernon firefighters shortly after midnight when a structure fire was reported in the 2100 block of Pearl. It had started in the kitchen.
The morning was quiet until a front rolled into North Texas at around 11:20 a.m., bringing wind gusts above 50 mph.
A rekindle at the Pearl structure fire was reported at 11:31 a.m. and fire personnel responded. At the same time, 911 callers reported a grass fire at the Hillcrest Country Club, moving rapidly toward Brewer Street.
While personnel were dealing with those two fires, EMS received a 911 call at 12:14 p.m. needing an ambulance — this left the fire department stretched to the limit, with only one person manning the station.

With the high winds unabated, at 12:23 p.m. Wichita Falls emergency dispatch transferred a call to Vernon of a grass fire at FM 1763 near Harrold, and then more fires were reported at County Line Road, and stretching back to Electra, along U.S. 287. The fires, according to Vernon city officials, appeared to have been started by electrical lines sparking in the wind or by a train on the tracks setting off sparks.
A Vernon grass fire TIFMAS vehicle was diverted from the golf course fire toward the Wichita county line.
As the rapidly moving fires churned up smoke, they obliterated visibility. A four-car accident, due to blowing smoke was reported on 287, west of the county line. Injuries were reported as minor.

The Wilbarger County Sheriff Office was dispatched to assist with traffic control. Then more help was needed. The Vernon Police were called for assistance, dispatching three units to Harrold, as 287 was closed and traffic diverted.
While the fires were raging, two dozers were sent into create fire lines. Due to low visibility one of the dozers sideswiped a Vernon Fire Department vehicle.
Vernon City Manager Marty Mangum said the vehicle was totaled and that two Vernon firefighters were injured and taken to ER. They were
treated and released, he said.
While the winds stoked fires, they also caused utility lines to fall in Vernon. at 4:25 p.m., Vernon emergency dispatch received a call of a line down over the road in the 1900 block of London. That was one of several calls of line issues, police spokesman Lt. Mickey Allen stated.
The fires continued to burn to the east. At 6:36 a.m. Saturday, Electra PD reported to Vernon dispatch that
several small fires were burning along 1763, with two Vernon Fire vehicles dispatched. A grass fire was reported in Vernon at the Laurie Street exit along the median of 287 at 4:32 p.m., and more fires along the railroad tracks near Harrold were reported at 4:47 p.m.
At 12:09 a.m. Sunday, Burlington Northern reported a small brush fire burning along the tracks along 287 east of Vernon, they reported it had also been burning the day before.
At 8:07 a.m., a barn fire in Hardeman County was reported on FM 1207 with Vernon called to assist.
At 4:47 p.m., smoke was reported at Eastview Cemetery, but no fire was found.
Approximately 2,000 acres burned between Harrold and Electra. The fire destroyed one home and a garage in Electra and damaged the Electra ISD’s farm facility, which is used by 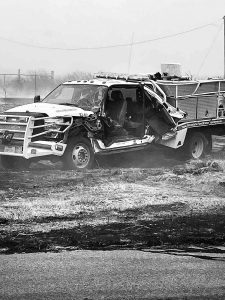