Two games last week, a win and a loss, show how much progress the Vernon Lions basketball team has made and that this hoops squad has the potential to make some noise come playoff time.
The Lions went toe-to-toe with perennial power Burkburnett and almost pulled off the upset, after leading in the final two minutes of the game. Then on Saturday, the Lions traveled to Graham and completed the sweep of the Steers with a 62-56 victory.
The Lions final to regular season games, at Iowa Park and at Mineral Wells will determine if the Lions will be the third or fourth seed coming out of district 5-4A.
Vernon 62, Graham 56
The Lions went on the road Saturday afternoon and shook off a sluggish first quarter, to complete the sweep of the Steers 62-56. The Lions led 16-14 after one quarter, with the Lions hot from outside as Adarius Williams drained two three-pointers and Kell Castleberry connected on a trey.
The game was tied 16-16 before the Lions went on a 11-2 run, keyed by another Castleberry three– to give Vernon a 27-18 lead with 5:30 left before half, and prompting a Graham timeout. The Lions held Graham to just two buckets in the quarter as they built a 40-25 lead at half. Vernon missed seven free throws in the quarter or it would have been a blow out.
The Lions coasted in for the win.

Vernon 16 24 12 10 — 62
Graham 14 11 14 17 — 56
Vernon — Kell Castleberry 10, Julius Dawkins 10, Sebastian Garza 10, Tyrone McKinney 9, Adarius Williams 6, Eric Trejo 5, Lavery Gonzales 5, Tavares Gaines 4, Cross Durham 3.
Free throws – (G) 16-29, (V) 18-29.
3-pointers – (V) 4 (Castleberry 2, Williams 2).
Vernon 79, Burkburnett 87
Julius Dawkins poured in 34 points and Lavery Gonzales knocked down five three-pointers as the Lions came oh-so-close to knocking off state powerhouse Burkburnett last Tuesday.
Burkburnett may have taken the 87-79 win over Vernon, but the Lions served notice they can play with the perennial top Dogs.
The game seemed to be going according to the well-worn script of a Burkburnett blowout, as the Bulldogs led 29-17 after one quarter and 45-36 at half. The Bulldogs pushed the lead to 10, 50-40 a little over a minute into the third, then the Lions went on a tear as Lavery Gonzales knocked down four three-pointers in the quarter and the Lions trailed 62-59 with 42.7 second left in the third. The Bulldogs it a three near the buzzer and still held a 65-59 lead heading to the final frame.
Burk pushed the lead to 67-59 on the first possession of the fourth. And then the Lions Julius Dawkins hoop and free throw ignited a 13-2 run over the next two minutes. Sebastian Garza’s layup cut the lead to 67-64. A defensive stop gave the Lions the ball and Adarius Williams drained a three to make it 67-67 with 6:11 left in the game, and prompted a Bulldog timeout. The game was tied at 69-69 when Gonzales drained his fifth three-pointer to put Vernon ahead 72-69 with 5:06 left.
The two teams traded the lead 73-72 Burk ahead, 74-73 Vernon ahead, 75-74 Burk up. Dawkins hit a pair of free throws to give Vernon the 76-75 lead and then he got a basket and was fouled. His free shot left Vernon up 79-75 in the final two minutes.
Burkkburnett switched to a 2-2-1 full court press, with a 2-2-1 half court press and the tired Lions ran out of steam. The Bulldogs closed on a 12-0 run for the win, helped by a big free throw differential of 33-14 in favor of Burkburnett. 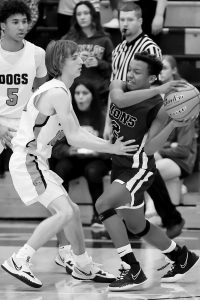