For the open seat of Wilbarger County Treasurer, Angie Boyd received 829 votes (62.9 percent), compared to Amber Lagunas Cobb with 489 votes. Boyd had 70 percent of the 100 absentee ballots, 61.5 percent of the 617 early votes and 63 percent of the 601 election day votes. There were 62 under votes.

County Commissioner Pct. 4 Josh Patterson faced a challenger in the primary from Jerry Pennartz. Patterson won with 105 votes — 61 percent to 67 for Pennartz. Patterson had a 7-2 lead after absentee ballots, lead 56 votes to 42 in early voting and won 105 to 67 election day 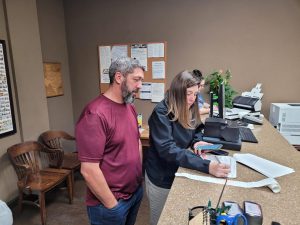 Justice of the Peace candidate Clinton Nava and his wife Bambi, check over vote counts at the Wilbarger County Courthouse on Tuesday, during the Texas Primary.
Daniel Walker/Vernon Record 42 to 23 votes on election day.

Incumbent Justice of the Peace Pct. 1 Gene Morton faced a challenge from Sharon McCarty Goins. Morton received 366 (59.8 percent) to 246 for Goins. Goins received 19 absentee votes to 16 for Morton. Morton had 175 early votes to 105 for Goins, and Morton had 175 votes on election day to 122 for Goins.

County Clerk Jana Kennon reported no votes were  rejected on election day and everything went smoothly.

U.S. Congressman Ronny Jackson (TX-13) was unopposed in the Primary. He received 1,117 (81 percent) with 263 under votes. He released the following statement after officially securing the Republican nomination in his bid for a second term: “I am humbled by the outpouring of support I have received from so many Patriots across our district. Tonight marks the beginning of what is sure to be a huge Red Wave come November. I am in Washington addressing Putin’s invasion of Ukraine, but I will be back in the great State of Texas in the days, weeks, and months ahead to update you on the work I am doing on your behalf in Congress. As we head into the General Election, we cannot get complacent as Democrats sink their own ship with failed socialist policies and misplaced priorities. Republicans know that we must push ahead in pursuit of our America First agenda. I will finish the fight, and I hope you will join me by getting involved in my campaign for Congress.”

The General Election will be held on Tuesday, November 8, 2022. He will face Kathleen Brown, who was unopposed on the Democratic side. She received 131 (88 percent) of the 149 votes cast in the Democratic primary.

Attorney General Ken Paxton won Wilbarger County with 44 percent to challenger George P. Bush with 35 percent and Eva Guzman at 13 percent. Statewide, Paxton looks to be headed for a primary runoff, with nearly half the votes counted late Tuesday, he is doubltful to hit 50 percent.  While Bush was the clear second locally, statewide he and Guzman were in a dead heat to be Paxton’s opponent in the runoff.

Don Minton and Dawn Buckingham were the top two vote-getters in the county for Land Commissioner (to replace Bush) — at 35 and 31 percent respectively. Statewide, Minton was trailing three other candidates, and Buckingham was still under the 50 percent threshold to avoid a runoff.