Vernon 18, Henrietta 7
The Vernon Lions used an 11-run outburst in the second inning thanks to a grand slam from Cooper Quillin to blow past Henrietta 18-7 last Thursday afternoon.
The Lions scored a run in the bottom of the first. A Smith led off with a walk, went to third on a single from Lavery Gonzales. He scored sacrifice fly to left field by Garrett Pierce. The Bearcats tied the game in the top of the second, then the Lions exploded.
Case Fleming led off with a walk, went to second, the third on wild pitches. He scored on a single to left from Sawyer Brannon. Brannon scored on a double from Gavin Pierce. Ayden Smith reached on an error and Gonzales singled to left to load the bases. Cooper Quillin launched a1-0 count fastball over the left field fence for a grand slam and It was 7-1.
But the Lions were just getting started. Garrett Pierce was hit by a pitch and Cross Durham took a walk. They both advanced on wild pitches. C. Fleming grounder to short was misplayed and both runners scored. Brannon was hit by a pitch Austen Fleming hit a line drive to left that was misplayed and two more runs came in. Fleming went to third and scored on a wild pitch to close out the inning’s scoring with Vernon up 12-1.
Quillin went 3 for 4 from the plate with a home run, two doubles, 5 RBIs and 3 runs scored. C. Fleming had 4 RBIs and three runs scored. Garrett Pierce was 2 for 4 with 3 runs scored.
Gonzales got the win on the mound, pitching four innings with 5 strikeouts. Gavin Pierce had an inning of scoreless relief.
Henrietta 01 24 0 — 7 9 7
Vernon 1(11) 4 2 x — 18 10 1 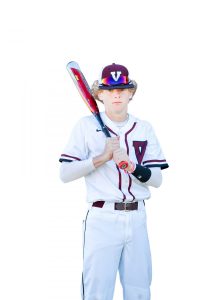