Final update: On Monday, May 23 at 9 a.m., the Texas A&M Forest Service reported that the “Coconut Fire” in south west Wilbarger County was 100 percent contained after it had burned through 28,448 acres over the previous week.

Friday Morning Update: Texas A&M Forest Service updated the status of the brush fire burning across southern Wilbarger County. At 9 a.m., the Service reported the blaze was at 26,000 acres and45 percent contained. “Crews worked to tie in containment lines yesterday. Today the focus is mop up, patrol, and the completion of line on the east flank of the fire

Thursday Evening update: A temporary flight restriction has been implemented over the wildfire.

Thursday Morning Update: Texas A&M Forest Service updated the status of the brush fire burning across southern Wilbarger County. At 8 a.m. Thursday, the service reported the fire was 25,000 acres and 20 % contained. “Today, crews expect the fire to be active once again, as conditions remain hot, dry and wind speeds increasing throughout the day.”

Original Story: A Texas A&M Forest Service firefighter suffered multiple burn wounds while working to contain the Coconut Fire in southern Wilbarger County on the Waggoner Ranch. The injury to the firefighter 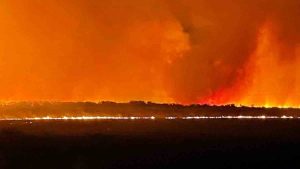 A Texas A&M Forest Service photo of the fire burning in southern Wilbarger County overnight May 17-18.occurred at approximately 10:30 p.m. on Tuesday, May 17.

The forest service said a thunderstorm developed near the fire area, causing erratic winds and a sudden change in the fire’s behavior.

“A downburst from the thunderstorm caused the fire to erupt, and impacted personnel working the fire,” the service said.

The firefighter suffered burns from radiant heat, was taken to a hospital for treatment, and released. No other firefighters were injured.

“Our thoughts are with the injured firefighter, their family and friends as well as all personnel involved,” the forest service said.

The Coconut Fire is an estimated 9,000 acres and 30 percent contained as of Wednesday midday.

The service reported at around 11 a.m. Wednesday that “Fire behavior increased early this morning, making a push on the right flank of the fire. Heavy equipment are constructing line in the area. Aviation has been ordered to assist.”