The 33rd edition of Summer’s Last Blast, hosted by the Vernon Street Machines and Classics Association, will be back on the streets of Vernon this year as the event takes place Aug. 11, 12, and 13.
Jim Gryseels, VSMCA president, said he expects as many if not more participants as in the past years.
“We have over 200 pre-registered right now, and we expect a lot more,” he said.
He noted that one participant, from Wichita Falls, is bringing 15 vehicles.
To be in the Cruise, which will take place from 7 p.m. to 9:30 p.m., on Saturday, Aug. 13, on Wilbarger, cruisers can pre-register online or pick up a form at Commerce Auto Parts, 2100 Wilbarger. Registration is $20. Forms can also be down­loaded on line at www.summerslateblast.com.
Registration forms for the Cruise will also be available at the SLB headquarters in Orbison Park during the Show and Shine, and beginning at 6 p.m., Cruise Night, they can register on the south side of the courthouse.
The 33rd Summer’s Last Blast is being dedicated to the memory of Carl Hopper, long-time VSMCA member who passed away in 2021.

See the print and online editions for complete event schedules. 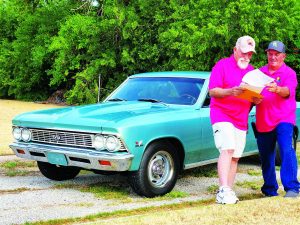