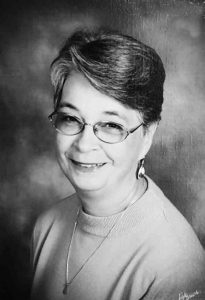 Patty Selman, 77 of Seymour, Texas died on Wednesday, July 27, 2022, in Wichita Falls, Texas.Memorial services will be held Friday, Aug. 5, 2022 at 10 a.m.at First Baptist Church in Seymour, Texas, Officiating will be Dr. David Warren then later there will be a service at 2 p.m. at First Baptist Church in Vernon, Texas. Officiating will be Dr. Derrell Monday. Interment will be held at Wilbarger Memorial Park under the direction of Sullivan Funeral Home.Patty was born Wednesday, Jan. 3, 1945 in Grandfield, Oklahoma. She was the daughter of the late Marion Carlton “MC” Greenway and the late Lillian Dockery Greenway. She married John Hayden “Salty” Selman on Aug. 13, 1965 in Vernon, Texas. He preceded her in death on July 30, 2014. She retired from Vernon ISD in Accounts Payable. She also was librarian for First Baptist Church, and later she worked at Baylor County Library. She was a member of First Baptist Church of Seymour, Texas and formally a member of First Baptist Church in Vernon, Texas. Patty is survived by her son, Casey Selman of Seymour, Texas and wife Carla, her grandchildren Johnathan Cole Selman and wife Rikke, Clinton Thomas Selman, Courtney Fields Selman, and her great granddaughter Lillebeth Ry Selman. Her siblings, Sherry Morton, Sue Recer and husband Jim; Randy Greenway and wife Susan; Rita Baker and husband Nicky; and Harry Greenway and wife Adele. She is also survived by several nieces, nephews, great nieces and great nephews. Memorials can be made to St. Jude’s Children’s Hospital, Hospice of Wichita Falls, or Samaritan Purse. Online condolences may be made to the family at www.sullivanfuneralhomevernon.comPatty