October is National Domestic Violence Awareness Month and local officials are calling on citizens to actively work toward eradicating domestic violence in our community.
At a signing ceremony on Monday at Vernon City Hall, Mayor Pam Gosline signed an official proclamation demonstrating the city’s commitment to fighting domestic violence. The proclamation recognizes that “…the impact of domestic violence is wide ranging, directly affecting individuals and society as a whole, throughout the United States, and here in the City of Vernon.”

See more in the print and online editions. 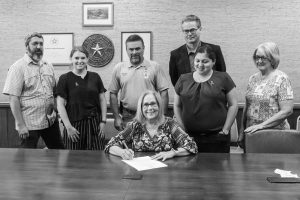