The City of Vernon is looking for a new police chief after Chief Randall Agan submitted his two-weeks notice of resignation Monday to City Manager Marty Mangum.
Agan took over the police department’s top spot in December of 2017.
As chief, Agan feels that one of his accomplishments was to restore the public’s faith in the police department. Another accomplishment that Agan felt he achieved was, “Bringing (the department) into the 21st century.”
“There are still areas (the department) needs to build and bring technology to,” said Agan.
“As far as technology, it takes time.”
Agan expressed his thanks to the citizens of Vernon for the support they gave during his time in Vernon and hopes that they will continue to support the department’s future endeavors.
“I want to thank (city manager) Mangum for his valuable support and for giving me the opportunity to serve the citizens of Vernon as chief of police,” Agan said.
“And I want to thank the outstanding men and women of the Vernon Police Department, without whom I couldn’t have done anything.”
Agan’s biggest shout-out was reserved for his wife Elizabeth, who he credited with putting up with his responding to late night calls and having to put personal plans on hold at a moment’s notice.
Agan has accepted a job in the metroplex. 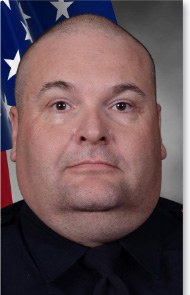