Daniel Walker
Vernon Record
The challenge this week for the Vernon Lions is not to let one loss become two. Vernon travels to Tuscola to face Jim Ned High School on Friday for a battle with the district unbeaten Indians.
It’s the perfect measuring stick to see how much progress they’ve made. Jim Ned has not lost a district game since 2019 and won a state title two years ago.
“Every game is more important than the one you just played. I’ve told our kids they still have a chance at a district championship,” Coach Kevin Sherrill said. “A loss hurts, it’s disappointing, but we are a million miles ahead of where we were last year. We are 5-3, when we were 1-7 at this time last year. We are in games, with a chance to win this year, when we weren’t last year. We are growing, we are learning, we need to learn to win these close games. There is no need to hang our heads, we have so much to play for these next two weeks, the district is wide open.”
The Lions will have tough challenge this week, but one they can win.
“Jim Ned is a big physical team. They will be the most physical team we play,” Coach Sherrill said in scouting the team. They have been in some tight games. “They beat Clyde by 28-21. They beat Breckenridge by 7, and Breckenridge led for most of that game.”
Jim Ned’s Brayden Shipman scored a 5-yard touchdown run with 55.5 seconds left for a 32-25 victory over Breckenridge last week. Shipman’s score, his second of the game, capped a 12-play, 80-yard drive to snap a 25-25 tie. Shipman and quarterback Troy Doran combined for 308 yards rushing and three TDs. Jim Ned had 342 yards and four TDs overall on the ground. Doran had 174 yards on 18 carries, including a 45-yard TD run. Shipman had 134 yards on 20 carries.
“Looking at the film, those close scores don’t give a fair shake to just how good and dominant their lines have been. No. 55 and 61, the interior tackles use their hands well, they are hard to block. Then on offense they are also a tough combo when they are together blocking. They have a lot of pancake blocks. (No. 55) is getting a lot of D1 (college) interest. Our guys are going to have to play low and fast and use our quickness.”
The Jim Ned coach, Matt Fanning, echoed the sentiment after the Indians win over Breckenridge, telling the Abilene Reporter News: “Our guys up front, they play physical, they play nasty. They’ll get a flag every now and then for holding. But, hey, we ride ’em. That mentality is who we are, and it showed by letting us grind it out.”
Coach Sherrill expects to see a lot of man defense in the secondary, as the team bases out of a 4-3 scheme.
“The mike LB, No. 40, really stands out,” he said.
On offense, he expects to see a heavy dose of running the ball, the Indians attempted just three passes last week, running 41 plays, while milking the clock.
“They do a lot of 3-back stuff. They are okay with 3-yards and a cloud of dust. They want to control the tempo, keep us off the field. They’ve watched the Iowa Park film, they’ve seen how they just ran at us all game and controlled the clock. That’s right up Jim Ned’s alley, I’m sure they are thinking they will do the same thing. It is up to us to be more physical and stop them,” Coach Sherrill said. 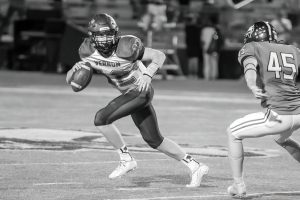 Vernon quarterback Kale Sherrill scrambles in the pocket in last Friday’s game at Iowa Park. Sherrill had 105 yards passing and 38 yards rushing in the game.