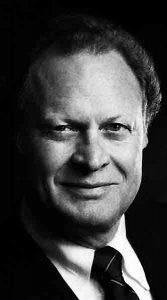 was a true Texas success story.  His parents were dairy and cotton farmers in Vernon, Texas, and he and his siblings shared tasks like milking cows and delivering milk.  He attended Southern Methodist University and added to his credentials by studying at SMU’s Graduate School of Banking. John married the love of his life, Mary Williams, in 1954.  They had a fairytale relationship, and adored each other, each one complimenting the other.  It was obvious to all that met them, especially on the dance floor!  They enjoyed entertaining friends and family and lived life to the fullest.John be gan

his banking career as a teller at Brazoria County State Bank in Angleton, Texas, and then moved to Freeport National Bank where he was employed from 1954 until 1962.  He attained senior officer status while there and served future banks as President, CEO or Chairman.  His move to Houston in 1962 furthered many years of experience, hard work, and skill in recognizing opportunity.  He was President and CEO of the then-new International Bank, which he said was “making money two months after the bank opened.” He then joined The Bank of Texas from 1969 to 1973, after which.  he moved to Dallas’ National Bank of Comm

erce for a two-year opportunity.  He subsequently returned to Houston to serve Capital National Bank, North Side Bank (later BancTexas), and in 1984 joine

d American Bank from which he retired in 1996.

John held extraordinary knowledge and experience in banking, finance, economics, investments and general business acumen, and had a large following of protégé’s whom he cultivated to make his banks successful.  Many of those professionals went on to enjoy satisfying careers in the banking field.  John was also very proud of his involvement with the FBI, traveling the country to educate their agents, including those serving at Quantico, thwarting bank fraud.

on to his considerable business accomplishments, John engaged in many social and charitable activities.  He was an avid runner and finished both the Crowley and Boston marathons.  He strongly supported the YMCA, and spent many years actively involved in co-founding, financing, and supporting the successful Briarwood School and Brookwood School which teach and care for children with learning disabilities. John was Vice Chairman of Houston’s United Way, headed the Houston Symphony’s fund-raising program for two seasons, was President of the World Trade Club, served on the World Business Council, was one of two public interest representatives to the Texas State Bar, and much more.

He is survived by Mary, his beloved wife of 64 years, daughter Robin Hazard of Rockport; son John Roger Hazard and his husband Chris Stout of Omaha, Neb.; daughter Tracy Allen and her husband Jim Allen of Charlotte, NC.; and two grandchildren, Kate Allen of Philadelphia, Pa. and Will Allen of Portland, Ore.; brother William Hazard and sister Theresa Hazard Case.  He will also be remembered by many nieces and nephews.

A memorial service in celebration of John’s life will be held at 11 a.m. on Saturday, Nov. 3, at First United Methodist Church, 801 East Main Street, Rockport.

In lieu of flowers, donations may be made to the First United Methodist Church of Rockport, and the Rockport Center for the Arts.