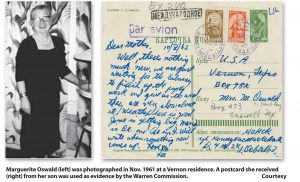 Fifty-five years ago, on Nov. 22 1963, President John F. Kennedy was assassinated by a lone gunman, Lee Harvey Oswald in Dallas. That’s according to the Warren Commission appointed by President Lyndon Johnson to investigate the crime.
Several witnesses in the Warren Commission investigation had ties to Vernon due to the fact that Oswald’s mother, Marguerite, had lived and worked in the area in the early 1960s.

See more in the online edition.