Burial will follow at Perryman Cemetery in Forestburg, Texas.

Arrangements entrusted to the White Family Funeral Home of Bowie.

Eli was born Jan, 13,1930 to Bert Lewis Harvill, Sr and Lucille Steadham Harvill. He was born on the family farm near Saint Jo, Texas and grew up around the Forestburg, and Saint Jo areas. He attended school in Dye Mound, Saint Jo, and Forestburg.

He began his career working for the State hospitals in Wichita Falls and Vernon, Texas. He entered military service in 1951. After basic training in Georgia, he shipped overseas and served as a Communications specialist in war-torn Europe stationed in Augsburg, Germany. After the military, Eli resumed his work as Engineering Supervisor with the State institutions. He entered Midwestern State University, receiving his Degree in education in 1958. His career with the state spanned almost 40 years. After his retirement from the State, he returned to Forestburg to raise cattle in Montague county for many years. 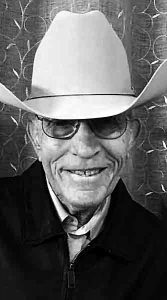