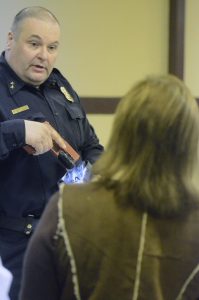 Vernon Police Chief Randy Agan unholsters a gun fitted with a camera during a demonstration on Tuesday at Orbison Park.
Daniel Walker/Vernon Record

The Vernon Police Department became the first police department in Texas to implement the use of gun-mounted cameras. The department has been testing the cameras for the past three months and officially unveiled 20 of the cameras on Tuesday.
The weapon-mounted camera begins recording as soon as the gun is removed from the holster. It records both audio and video. It has a battery life of 3 and a half hours and can record six hours of video before overwriting the data. It also is equipped with a flashlight, that automatically engages.
Vernon Police Chief Randy Agan said the gun camera provides a better view of what an officer sees if he discharges his weapon, that body cameras can be obstructed by an arm or obstacles, but the gun camera shows a true view of what the officer is seeing.
“This is easy to implement and affordable, but most importantly we feel it benefits our officers. The challenges they face today mean that having this visibility into potential use-of-force incidents is very important. And we have already seen (it) help us gain valuable footage from the field that was not captured by other camera systems.”
The cameras are provided by Viridian Weapon Technologies. Viridian president Brian Hedeen said they were designed specifically for officer involved shootings.
“What we’ve seen in the past few years, is there’s been an event,” Hedeen said. “There’s been conflicting witness reports and you’re just sort of left wondering. This is designed to remove any doubt what did they see in that moment.”
City Manager Marty Mangum said that the gun cameras will not replace the department’s current body-worn cameras or vehicle dash cameras.
“It’s just another tool to ensure accountability,” he said.
Chief Agan said that officers have fired the camera-equipped guns in qualifying and the gun range and had no issues with accuracy.
“What we did see was that we could observe if an officer was pulling one way or another and help to correct that firing form,” he said.
Police said that the whole time a gun has been fired in the line of duty in the past year was during an aggressive animal attack last summer. Agan said cameras have not been purchased for he department’s rifles or shotguns, but that is a long-term goal.
The camera system was purchased through grants to the city, and not city funds Mayor Doug Jeffrey said
In addition to Vernon’s deployment, there are more than 50 other departments in Texas currently testing and evaluating the camera, according to Hedeen. Nationally there are over 400 agencies testing and implementing this technology.