The Vernon High School One-Act Play Company “The Book of Everything” advanced to compete at the bi-district level after winning first place at the district level during the district contest Saturday, March 9 at Wilbarger Auditorium.
Brandon Goins, Lillian James and J.C. Freeman were named to the “All-Star Cast” while Eli Goodman and Ezekiel Walker were named All-Star Cast honorable mention. Alyssa Fulford was named “Best Actress” and Lyndsey Dennis was honored for “Best Sound.”
Other competing district schools’ One-Act Plays that appeared at Saturday’s included Burkburnett, Iowa Park, Graham and Hirschi.
The bi-district contest will be March 26 in Abilene.
“The Book of Everything” is adapted by Richard Tulloch from the novel by Guus Kuijer. It is a story staged in Amsterdam in the early 1950s about a 9-year-old boy name Thomas who started to write a book but his father is insisting that all important books are about God.
Even so, Thomas writes down all the interesting things he sees that other people seem to ignore such as tropical fish in the canal, a deluge for frogs, the Son of God popping in for a chat. He also writes down his greatest determination: “When I grow up, I’m going to be happy.”
Featuring Jesus, the angels, the Bumbiter, the startling Mrs. Van Amersfoort and a beautiful girl with a leather leg, this is a totally magical story about a child learning to act when faced with fear and wrong.
Cast members include Goins (Thomas), Taylor E. Jackson (Margot), Fulford (Mother), Freeman (Father), Goodman (Jesus), Dhani Edwards (Eliza), Addison Ragland (Auntie Pie) and Lillian James (Mrs. Van Amersfoort).
The ensemble includes Eliana Lopez, Kaitlyn Blevins, Walker, Shell Tay, Ashton Bryant and Melanie Sanchez. Crew members are Kaytlen Hodges, stage manager; Aryana Willie, Kassidy Allen, lights; Dennis, sound; and Emily Morrison. 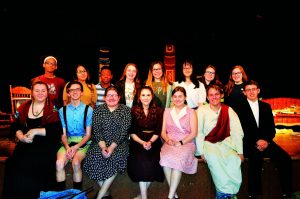