He was born Oct. 18, 1922 in Hill County, Texas. Johnny moved with his family to the Lockett Community in 1928. He was a member First United Methodist Church.

Johnny graduated from South Lockett High School and enlisted in the U.S. Army Air Corp in October 1942 and was honorary discharged on Dec. 1, 1945, serving in WWII. He married Dortha Jean Hampton in May on 1951. They celebrated 61 years of marriage before Dortha’s passing in 2013. Prior to his retirement, Johnny was a 35-year employee for Lone Star Gas Co. He was a member of the Vernon Lions Club, and he officiated high school football and baseball games, Wichita Falls Chapter for 26 years.

The family requests in-lieu of flowers that memorials donations are made in Johnny’s name to the Boys and Girls Club of Vernon and /or The Lion’s Club Kid League Baseball Program.

Special thanks to the staff of Eagle Flats Village and Hospice of Wichita Falls for the compassionate care he received. 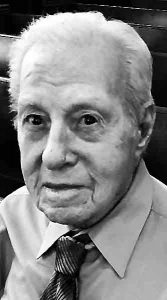