Editor’s note:The Vernon Daily Record remembers the 40th anniversary of Terrible Tuesday, April 10, 1979 when multiple tornadoes struck the area. An iconic photo from the time showed a City of Vernon vehicle in the living room of a house. The VDR told the story of the truck on the one-year anniversary in 1980, as the town continued to rebuild — Daniel Walker 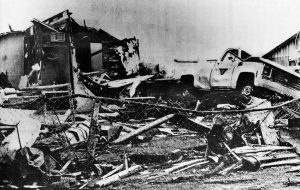 A photo from April 10, 1979 shows a City of Vernon truck in the front room of a house.
Charles Ashley/Vernon Record

Mrs. Billy Nava had put an apple pie in the oven as she went to work at the Vernon Drug Center. Controls were preset so that the pie would be prebaked when the family came home.

The baked pie wasn’t waiting, neither was the house, one of some 150 severely damaged or destroyed by a tornado that ravaged the community.

The Nava family rebuilt the home, formerly at 507 Atlanta, at a different location, facing it east rather than north, and as a result didn’t qualify for a low-interest government loan that they could have had  if they had been content to face their residence toward the Wilbarger Exhibit Building, which was also destroyed and reconstructed after the storm.

Mr. Nava estimated his family’s total loss and replacement cost, some of it covered by insurance, as in the vicinity of $60,000. Included in the new home, on which they secured a 10percent commercial loan at the bank before interest rates spiked, is a basement.

Mr. Nava, a longtime employee of the City of Vernon, who had never been afraid of storms will tell you quite frankly, “I’m scared of storms now.”

So is about everybody else in the neighborhood.

When a storm warning was issued the other day, Mr. Nava says, “There were something like 22 people here ready to go to the cellar.”

It was actually just such preparedness that saved lives in the neighborhood when the tornado struck.

Mrs. Joe Nava, mother of Mr. Billy Nava, visiting her family at the time of the storm and Mrs. Kenneth Nava, wife of his brother, shepherded a total of 15 persons, most of them children, into a storm cellar as the tornado literally shredded the residential area south of the Exhibit Building.

Mr. Nava and his brother Kenneth, drove in a city pickup from the City warehouse to their homes and directly in the path of the storm.

The memory of what happened will undoubtedly be with them for the rest f their lives.

Mr. Nava recalls that just before the sirens sounded that he and his brother saw three boys get off the school bus.

Mr. Nava recalls that one of them said, “Let’s go down and make sure everybody is in the cellar.”

They left the warehouse, which was undamaged by the storm and drove to their homes.

“We never did get a chance to get out of the pickup,” Mr. Nava recalls. “We met it in the driveway … It lifted the pickup high enough (maybe 20 feet into the air) that we could see the roof of his (Kenneth’s) house. It lasted a matter of 30 seconds. We came down in what had been his living room.”

Mr. Nava says he and his brother “got banged up quite a bit” when the funnel dropped the pickup to the earth.

“I got a few stitches in the head and a sprained arm … as far as hurting us physically, it didn’t. … It scared us to death.”

“We could see the debris circling around. … It completely demolished the pickup.

“People outside the tornado areas said they heard a tremendous roar. That’s one thing about us, we didn’t hear noise at all. The only noise I can remember is the gravel out of the driveway hitting the pickup.”

The storm knocked out the pickup windows. “It jus sucked them out. There wasn’t that much glass left in the pickup after it was over. The glass didn’t cut us. It was like chat bowing through after the glasses had broken.”

The experience changed some values for the Navas.

“We got a nice home, and nice furniture, but we just don’t treasure them as much as we did,” Mr. Nava explains. “We’re just grateful that the Lord saved our family. That’s the main thing … “

“I think it made us humble. It taught us to appreciate one another as a whole. I don’t think we rely on material possessions anymore.”