Sammy Lee Phelps, 88, passed away peacefully surrounded by his kids, grandkids and great-grandkids. His strong will to live, unwavering faith in God, and the love and prayers of family and friends carried him through the last few months of his life.

Sammy Lee ‘Sam’ Phelps was born Jan. 21, 1931, in Perryton to BJ ‘Foot’ and Ruby Phelps. He was one of two children. After graduating from Perryton High School, he met the love of his life, Shirley Good Phelps, at a dance in Canadian, Texas, and they married on Oct. 14, 1949. Sam and Shirley were married for 66 years and would have been celebrating their 70th anniversary the day before his passing. We know they are celebrating in Heaven!

Sam and Shirley raised their two children, Kenda and Brent, over the years in Perryton, Dalhart and Vernon, Texas. Sam took great pride in serving as City Manager in Dalhart, Vernon, Mineral Wells, Alvin, and Glen Heights before returning to his beloved Mineral Wells. His love for his family, and his love of life, presented itself in many ways. Sam loved to attend church, golf, fish, hunt, and solve the world’s problems during morning coffee with buddies. Sam’s rich sense of humor and his engaging smile made friends all over the great state of Texas and Colorado where he and Shirley enjoyed camping in their RV.  He never met a stranger and was always telling jokes to make people laugh.

However, Sam’s most precious gift was the time he spent with family, including granddaughters and great-grandchildren, who most lovingly called him Pepa (or Pape). He and Shirley didn’t miss the birth or birthday celebration for any of their six great-grandchildren who lived in Texas. After Shirley’s passing, the last great-grandchild was born, whom he was able to enjoy through daily visits at his home. Sam was a strong man of faith, serving as Deacon of the church at First Baptist Church in Vernon and Mineral Wells. He shaped the lives of family and friends by his tireless Christian example and steadfast love. Sam’s devotion to his wife and family will forever be remembered. 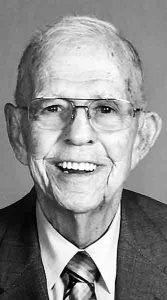 ner Boswell, of Mineral Wells; and many nieces, nephews and cousins.

He was preceded in death by his wife, Shirley Good Phelps; parents, Foot and Ruby Phelps; sister, June Whippo; and son-in-law, Peter Arsenault.

Memorials can be made to First Baptist Church of Mineral Wells, Texas.