“This is a special day,” Lion Club member Mike Moore said. “We have five special young boys and girls with us.”

Moore said the Vernon Lions Club had partnered with the local community and with the International Cycle for Life to provide six accessible, customizable bikes to children with permanent disabilities. Five of the bikes went to local children.

The Club also donated a tandem bicycle to the Vernon ISD. The bike can be used for special needs students, such as those with vision loss, to help them exercise.

Moore welcomed Joe Tarver, founder of the Cycle for Life charity. Tarver said his family began building the bikes about 40 years ago. Cycle for Life provides outdoor cycles which allow individuals with a variety of special physical needs to participate in the simple activity of riding a bike. Each cycle is custom designed for the rider, and may include special adaptive specifications such as: custom seating, arm rests, lap and chest belts, foot and heel straps, foot and leg rests, and pedal modifications. Some may be outfitted with a combination of handlebar power and foot power.

“People need exercise, and there’s no exception. There are over 5 million children in the U.S., under the age of 15, that need help. It is hard for them to get the exercise and help they need,” said Tarver, who is a member of the Lubbock Lions Club.

Each cycle costs about $1,500 to manufacture. Tarver thanked the Vernon Lions for their commitment and efforts to provide the six bikes – the Club also donated a special bike last year.

“The Lions Club here has done a lot of work,” he said.

Tarver said that one hour a week on the bike is worth $80 in physical therapy value. In 10 years that’s a $40,000 cycle,” he said. “Most ride three or four hours a day. They may not know that they are getting therapy … because of the fun they are having.”

Tarver added does not include the value of the joy and socialization that a cycle provides.

After receiving their bikes, the children rode in a parade around the Empire Room at the Wilbarger Auditorium, joined by several of the Lions Club members. 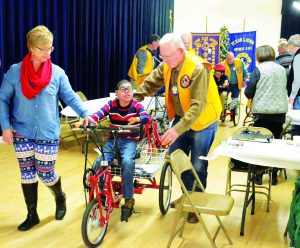