The Vernon Boys & Girls Club robotics team made an unprecedented showing at the North Texas First Lego League Regional Championship in Dallas on Saturday. The Vernon team, Insert Name Here, won the 1st Place Champion’s Award, placing first among the 68 teams to advance to the World Festival in Houston, which will be held from April 15th to 18th. The World Competition will feature teams from over seventy countries in the world’s largest youth robotics competition.

“I am so proud of our team,” stated Coach Meg Heatly. “ The kids worked very hard this year and it showed on Saturday.  I know that they will be great representatives of the Boys and Girls Club and Vernon at Worlds.  I’m very excited that they will have the opportunity to compete with teams from around the globe.”

The Vernon team faced stiff competition at the Regional Championship on Saturday, which was hosted at Parish Episcopal School in Dallas.  According to Heatly, the team made an incredible showing, winning second in Robot Performance and advancing as the overall first place team for the region.  The First Lego League competition consists of a timed robot game and three judged presentations – a project presentation, core values presentation, and a robot design presentation.  This year’s theme was City Shapers and teams had to identify a problem in their community and create a solution to the problem.  Insert Name Here identified the problem of too many empty lots downtown in Vernon and designed a multi-generational gathering place for an empty lot downtown.  Their idea would transform an eyesore into a  beautiful spot where visitors and citizens of Vernon could gather together.

“I’d like to thank the Vernon city officials for all of their support of the robotics team.  They met with the kids on several occasions and provided lots of great feedback,” stated Heatly.

Executive Director of the Boys & Girls Club, Sarah Hernandez, shares in Heatly’s sentiments, “We are just overjoyed by the support we have received from the community. The Robotics project was an idea by Mrs. Beverly Campsey 5 years ago and Meg has worked hard to see it come to fruition. Thanks to a seed grant from Vernon Auto Group, our program has grown from nothing to advancing to the World Competition in just 4 short years. We are incredibly proud of the accomplishments of this team of kids and their coaches and we are so looking forward to rooting them on in their future successes.” 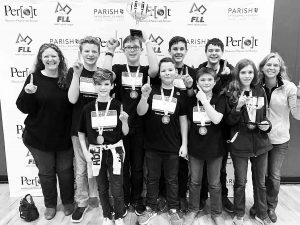