On March 28, 2020, Walter Wayne Scott passed away peacefully at his lake house in Paris, Texas. He is survived by his high school sweetheart and beloved wife, Lucinda Rouse Scott, his daughter Rachel Scott Hoskins, his son Ryan Wayne Scott, his, as he lovingly referred to her as, red headed step child Kristi Rader Martin, his son in law David Hoskins, and his three handsome grandsons Hud, Holden, and Finn Hoskins. Walter, better known to those who knew and loved him as Coach Scott, Bops, and Walt, was born on the Sheppard Airforce Base in Wichita Falls, Texas on March 9, 1950 to his loving
parents Wayne D. Scott and Elvira S. Scott. He had two sisters Barbara Scott and Rebecca Scott as well as a niece and nephew, Kayla and Cody Freeman.
Being part of an Air Force family, Walt lived an adventurous and exciting life where they were always
on the move. I mean, how many people can say they got to ride a camel to and from school while living in Tripoli, Libya? Walt Scott sure can. Eventually, his family settled down in Roseville, California where he attended Oakmont High School and found his two loves: Cinda and football. After graduating from Oakmont in 1968, Walt and Cinda went their separate ways physically to pursue their dreams of being college athletes and still maintained their relationship despite the distance between them with Walt at Tarleton State University.
Walt and his young family moved to Vernon, Texas in 1976 where he began his career as a coach and educator for the Vernon Independent School District. He spent 27 years teaching and coaching football and in 1990, Walt as part of the varsity football coaching staff and his team made a dream come true, they brought home the State Championship. While he was known and revered mostly
for his football coaching, Walt was no stranger to the other sports as well.
Through his time in Vernon, Walt blessed many sports with his coaching expertise including track and field, basketball, and golf. Walt and his family loved Vernon, but in 2003 after their kids had grown up and left Vernon Walt and Cinda moved to Princeton, Texas where Walt took his position as a history
teacher and Varsity Football Coach. He remained there for 3 years before moving on to the final act of his professional life, the Athletic Director and Head Football Coach of the Gainesville State School until his retirement in 2016. Our husband, father, grandfather, and friend will truly be missed.
Funeral services are provided by Bright-Holland Funeral Home in Paris, Texas, and graveside services will be held at Forest Chapel Cemetery in Chicota, Texas on April 2, 2020 at 2 p.m. 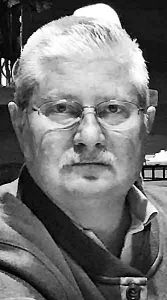