Lyndle (Lyndie) Ray Echols passed from this life surrounded by family in his Chillicothe, Texas home, on May 1, 2020. He was 74.He was born on June 2,1945 to Clovis and RavaNell Echols, in Eagle Pass, Texas, where Clovis briefl y served as a Border Patrol Agent, before returning to his family’s farm in the South Texas community of Rangerville.Following suit, Lyndle graduated from San Benito High School in 1963 followed by the Border Patrol Academy in 1967. He was a Border Patrol Agent for fi ve years, when ultimately, he chose to follow in the footsteps of his Dad and older brother and became a farmer, specifi cally a custom farmer. This career spanned 50 years, and with his brother, took him as far north as New Mexico, and as well as, deep into South Mexico.Those who knew him at all, knew that there was absolutely 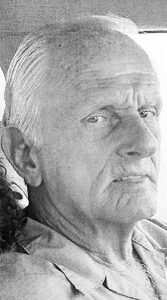 nothing he couldn’t or wouldn’t do, except take credit for all he did, including his hundreds, if not thousands of inventions.He was ever mindful from Whom his talents and blessings came, and it was to Him alone that Lyndle gave the glory.His attitude, even through the worst of pain and suffering, was always that of His grateful and humble servant.in 1992 he married Mayela Chavez and for 28 years they built a life they loved working hand-in-hand in ail that they did. They adored each other and were a living example of Genesis 2:24: “…and they shall become one fl esh”.In addition to his parents, Lyndle is preceded in death by his brother, Larry Echols, (three years, to the date, in 2017), and his grandson, Ethan Hausler (2012).He is survived by his wife, Mayela Chavez Echols, his three daughters, Barbie Echols Gunter, Deborah Parrish, and Tammy Hausler, 11 grandchildren, nine great-grandchildren, and numerous nieces and nephews.Lyndle’s family would like to give a very special thanks to Hospice of Wichita Falls, most especially to Tammy and Juanita for their amazing service to our Daddy and his family.In lieu of fl owers, the family wishes for memorial contributions to be made to St. Jude’s Children’s research Hospital.There will be a time for viewing and also visitation with the family on Thursday, May 7 from 6-8 p.m. at Smith Chapel in Chillicothe, Texas.A Celebration of Life will be held at a later date in Harlingen, Texas.