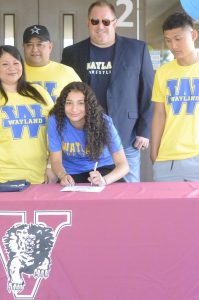 Vernon High 2020 graduate signed a letter of intent on Thursday, June 4, 2020 to wrestle for Wayland Baptist. She will be the first Lady Lion to wrestle at the college level. Daniel Walker/Vernon Record

“It was a disappointing senior year, first with the injury and then not being able to finish (due to the coronavirus shutdown,” Ortega said. “(This) really means everything to me, this is really a dream come true. I didn’t think it was going to happen. I was hoping it would, but I didn’t think it was going to happen after I dislocated my elbow, early in the season. So I missed district, regionals and what was supposed to be state for me and placing, working on state champion.”

She placed 4th at the UIL State Meet as a sophomore, but has had to battle through injuries the past two seasons.

Ortega began wrestling at just around 10 years old and credited her brother for getting her started. She found she was really good at it and she was hooked.

“I really like everything about wrestling. Mostly I like winning,” she said with a laugh. “I hope I can be a role model and encourage those girls coming up after me — don’t give up on your dreams.”

Ortega has the VHS school record for best finish by a female wrestler at State. “We have some great girls coming up in the program, one of them is going to break my record,” she said, adding some advice for those following her. “About the time when you start getting tired and don’t think you can, hopefully this will encourage you that you can keep going. Watch every match, see why you lost. Learn from it. Don’t get discouraged — get better.”

Her advice is something she also practices herself as VHS wrestling coach Derek Myers praised Ortega for her work ethic and leadership, even when she couldn’t compete due to injury.

Ortega said she is going to be majoring in Elementary Education and hopes to be  a coach.