Mattie McClintock Ivy passed away on May 31, 2020 from heart complications, surrounded by her 3 daughters. She was 87 years young, a loving wife, wonderful mother, sister, grandmoth 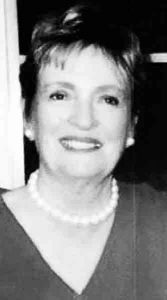 er, and one of a kind friend. Mattie was born to Ray and Zelma McClintock on March 18, 1933 in Chillicothe Texas, a town her heart never left. She attended the University of North Texas as an Education Major, enjoyed sorority life, and made lifelong friends. She met the love of her life, Tommy Joe Ivy, and they both graduated from North Texas in 1954. They married that same year. They lived in Pecos, Lubbock, and settled in Dallas, Texas. He preceded her in death in 1990 after 36 years of marriage. Mattie enjoyed a long career in education, while balancing family commitments and raising her 3 girls.
Mattie is survived by her daughters and their husbands: LuAnn and Evan Roberts, Christie and David Ivy, and Kerrie and Marc Fielden. She is also survived by her beloved sister, Mary Lou Throneberry, and devoted nephew Alan Ray Staples (Alison), and their children Avery, Kali, and Craig. Mattie has 9 grandchildren: Melissa, Joe, Natalie, Ivy, Madeline, Cliff, Mitchell, Hannah, and Brooke. Mattie has 8 great-grandchildren and 3 more on the way. She was also loved by numerous Ivy nieces and nephews. Her greatest love was spending time with her family. Some of the best memories were made with them at annual MIMS beach trips, known as “Mattie Ivy Madness”. She loved floating in the waves, sharing secrets, and any cause for celebration. Her grandchildren created the MIMS spin-off known as the annual Cousin’s Retreat.
Mattie was an active member of First United Methodist Church of Richardson, was involved in Book Club, Luncheon Group, and Dinner Club which was made up of other couples from their days at North Texas. They continue to meet monthly. Mattie created wonderful friendships with her neighbors in every neighborhood she lived in. She cherished those friendships.
During retirement she volunteered several days a week at Network Community of Ministries. If you wish to make a donation in Mattie’s honor, please do so to the Network Community of Ministries (thenetwork.org) or St. Jude’s Children’s hospital (stjude.org).
A private family service will be held at a later date. It will be hard to live in a world without GranMattie.