Val Jene Howard, 91 of Vernon, Texas, passed away on Saturday, July 25, 2020, in Vernon, Texas.
Celebration of Life service will be held Saturday, Aug. 1, 2020 at 2 p.m. at Calvary Baptist Church under the direction of Sullivan Funeral Home. Officiating will be Rev. Toby Castleberry. 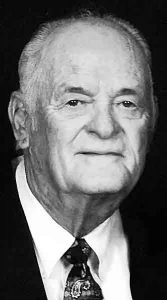 Val was born Friday, June 21, 1929 in Edmond, Okla. He was the son of the late Gordon Howard and the late Winnie Barrington Howard. He married Rose Marilyn Fuller on Sept. 6, 1961 in Las Vegas, Nev. He was a member of National Guard and a member of Masonic Lodge. He was a faithful member of Calvary Baptist Church and loved his church family.
Val grew up in Edmond, Okla., graduating from Edmond High School. As a teenager he tried out for baseball but instead got a scholarship to University of Oklahoma to play football. He then joined the rodeo circuit and tried his hand at bull riding. “I thought I was a bull rider.” After being on the professional rodeo circuit for five years he got hurt in a rodeo in Roswell, N.M. in 1951 and decided to take the advice of Lynn Butler and quit. With his days open, he took up playing golf and claimed the Santa Fe, N.M. city championship in 1951. When on the rodeo circuit he got many cowboys and clowns started in the game of golf, and a few still come out to the club to play when the rodeo is in town each year. After his rodeo career he then joined the PGA in 1969. In addition to his love for golf he also enjoyed fishing and hunting with his buddies
Val also had an interest in the oil and gas industry and began working for Sacra Brothers in Clovis, N.M.
He was sent to Pecos to close a gas station in 1961 that is where he met wife Marilyn, they shared fifty-nine wonderful years of marriage together. They moved to Lamesa in 1967 and that’s when he decided to become a golf pro at the Lamesa Country Club. Val later moved him and his family to Vernon in 1970 where he became pro-general manager of the Hillcrest Country Club, a position he held for 21 years before retiring with an honorary membership at the club. Val taught many juniors and held annual junior clinics at the course. This Junior Golf Program draws more than 40 junior golfers age 8 through 17. He also helped coach the Vernon High School Golf Team. He would always say “Junior golfers are our future”
He served as president of the West Texas Chapter of the Northern Texas PGA in 1971. He helped organize education programs and was the chapter’s education committee chairman for four years and served on the section’s education committee for two years. He won the Horton Smith Award for the chapter in 1978 and 1982 and won the chapter championship in 1980.
In 1994. Val was the honoree at the annual Texas Joe Black Cup Matches. He remained active in golf by assisting Tom Swiney at the River Creek Golf Course in Burkburnett and was named one of the Legends of Golf in Texoma. Most recently he had become a member of the half century club of the PGA.
Val is survived by his wife Rose Marilyn Howard of the home. He is also survived by one son, Val Jene Howard, Jr,and wife Imelda of Bay City, Texas, four daughters, Aldora Thackeray and husband Glenn of San Bernardino, Calif., Terri Bryan and husband Brad of Lubbock, Texas, Traci Wasmer and husband Kurt of Abilene, Texas and Toni Andrews and husband Randy of Lake Kiowa, Texas. 12 grandchildren and 16 great-grandchildren.
He was preceded in death by a granddaughter and one sister.
Memorials can be made to Hillcrest Country Club or favorite charity.
Online condolences may be made to the family at www.sullivanfuneralhomevernon.com.