The Wilbarger County Sheriff’s Office has added Ronnie Adams as the department’s new administrative assistant. Adams is a native of Odell, Texas. He is the son of Lynn Adams of Odell  and Donna Alexander of Cisco, Texas.

“This is the first time in Wilbarger County Sheriff’s Office history that a Texas Licensed Peace Officer will assume the duties as an Administrative Assistant. Deputy Adam’s duties will also include dispatching, records keeping and Court House Security while keeping a presence as an Office Deputy Sheriff. Deputy Adams will have all the powers of a Texas Peace Officer in the performance of his duties on or off as directed by Texas Law governing Texas Peace Officers,” Sheriff Bill Price said. 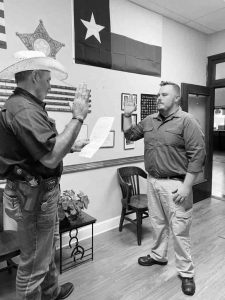