Delbert Garland Petitt, 98 of Vernon, Texas, died on Monday, Aug. 17, 2020, in Vernon, Texas.
Graveside service will be Friday, Aug. 21, 2020 at 10 a.m. at Eastview Cemetery under the direction of Sullivan Funeral Home.
Delbert was born Thursday, March 9, 1922 in Vernon, Texas. He was the son of the late Walter C. Petitt and the late Myrtie Jane Smith Petitt. He married Bessie Mae McNa 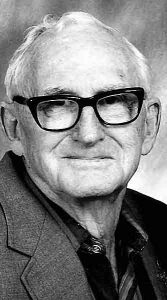 bb on June 22, 1940 in Vernon. She preceded him in death on Aug. 28, 2015. He had been a resident of Vernon all of his life. He served in the U.S. Air Force 1943-1946. He was a retired carpenter for W.T. Waggoner Estate. He was a member of Woodman of the World and American Legion. He was a member of Faith United Methodist Church.
Delbert is survived by his son, Larry Don Petitt of Sanford, Texas; daughter, Dianne Rollans of San Antonio, Texas; five grandchildren, Carla Adam, Lawanda Phelan, Cindy Hart, Michael Rollans, and Ryan Rollans; honorary granddaughter Alberta McGee; ten great-grandchildren, 17 great-great-grandchildren and three great-great-great-grandchildren,
Memorials can be made to Alzheimer Society or American Cancer Society.
Online condolences may be made to the family at www.sullivanfuneralhomevernon.com.