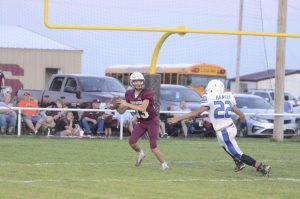 Northside quarterback Cody Spangler scrambles to avoid the rush in the win against Rule on Sept. 4.
Daniel Walker/Vernon Record

on Friday. The game is scheduled to begin at 7:30 p.m. Much like Gainesville, Holliday loves to run, churning out 440 yards on 61 carries last week. The Eagles rallied from a 28-0 deficit by shutting out Eastland for the final 25:32 of the game, to win 29-28 on a 2-point conversion from quarterback Peyton Marchand with 21 seconds left in the game.

Jaxx Johnson led Holliday with 21 carries for 190 rushing yards and 2 TDs. Marchand was 6 of 12 passing for 64 yards and a score. Holliday struggled with Iowa Park in week one, absorbing a 28-0 shutout.

The Lions defense should keep this game close, but the offense will need to find some punch for Vernon to win.

The Northside  Indians (2-0) travel to Hedley to encounter the Owls (2-0) in a non-district on Friday, September 11. Hedley won 34-28 in their recent game against Silverton and defeated Chillicothe in the season opener.

Chillicothe (1-1) went on the road last Thursday night and defeated the Darrouzett Longhorns by a 52-6 in a game played at Hedley. The Eagles will host Gold-Burg (0-2) for Homecoming this Friday night. The game is scheduled to start at 7:30 p.m.

The Harrold Hornets (0-2) hosted the Crowell JV last Thursday and fell in a 45-point loss. Harrold hosted the Northside JV this week on Thursday night, falling 45-0 in the third quarter. The game time is fluid, as it is scheduled to start after the the two team’s junior high contest, possibly around 7 p.m.

Crowell (1-0) had a bye on last Friday. They play defending state champion Richland Springs on Friday at Throckmorton.