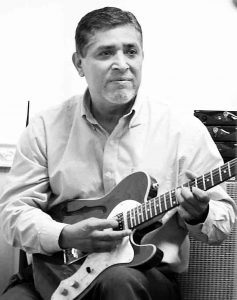 y” Munoz Ochoa, 57 of Vernon, Texas passed away on Tuesday, Sept. 8, 2020 in Vernon, Texas.
Funeral services were held Friday, Sept. 11, 2020 at 1 p.m. at the Templo Centro Evangelistico Church with Rev. Jonathan Ochoa. Burial followed at the Eastview Cemetery under the direction of Sullivan Funeral Home.
Sammy was born Monday, Nov. 26, 1962 in Taylor, Texas to the late Benjamin Ochoa and the late Emma Munoz Ochoa. Sammy married Melissa Ford Ochoa on June 11, 1982 in Vernon, Texas. Sammy had worked for Norman’s Catfish, and Freeman Construction and North Texas State Hospital. Sammy was an accomplished musician and had a passion for playing music for God. Sammy and his family were members of Templo Centro Evangelistico.

Sammy was proceeded in death by one daughter Candy Ochoa, one brother Jesse Ochoa and one granddaughter Vanessa Tyra.
Visitation was Thursday from 6-8 p.m. at the Sullivan Funeral Home Chapel.
Memorials can be made to Templo Centro Evangelistico Church.
Online condolences may be made to the family at www.sullivanfuneralhomevernon.com.