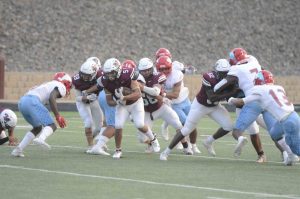 The Vernon Lions renew an old rivalry with Burkburnett this Friday, with both teams winless and hungry for a win. Vernon owns the all-time series 48-20-3, which dates to 1922, but the Lions have lost two in a row to the Bulldogs. Burkburnett blew out the Lions 49-17 last year.

Last Friday, the Vernon Lions ran into the big-play ability of the Hirschi Huskies, and fell 36-7. Vernon played better than the final score indicated, trailing 13-7  just before half, before a string of quick scores put the Lions way behind.

Burkburnett (0-3) was off last week. The Lions offense will have their best chance of the young season to get its offense on track. The Bulldogs have given up 55, 71 and 49 points in their three losses.

Northside will play the Gold-Burg Bears (2-2) on Friday. The Bears beat Arlington Texas Leadership Charter Academy 64-0 last week in a game over at half. The week before, the Bears beat Chillicothe in overtime 44-38.

The Northside Indians (3-1) took their first loss of the season, a 76-27 loss to the Benjamin Mustangs last Friday. The Indians were without their top defensive back due to an injury and it showed, as the Indians struggled with the passing attack.

The Indians fell behind 14-0 and faced a 4th down and 6 from the Benjamin 26. Quarterback Cody Spangler threw a deep pass to Kameron Hooker, who outjumped two Mustang defenders, on the left sideline and hauled in the ball and took I tin for the score. The conversion was good and Northside trailed 14-8 with 2:05 left in the first quarter.

The teams then traded a flurry of scoring punches, with four touchdowns in under a minute of game action. The Mustangs marched into the Northside redzone, but the Indians pushed them back into a 4th and 21 from the 22. Benjamin converted and scored to take a 22-8 lead with 40.4 seconds left in the quarter. The Indians came right back with a 34-yard pass from Spangler to Hooker and it was 22-14 with 27.7 left in the quarter. Benjamin then took a 30-14 lead.

The kickoff went to Tylan Hildebrand, who fielded the ball at the 28, ran laterally, gained the edge and outraced the coverage for the touchdown. It was 30-20 with 16.9 seconds left in the quarter.

Crowell has suspended athletic activities after the cross country team attended a meet where a positive covid case was also attending. Motley County (3-1) topped Crowell 52-37 on Friday. The Wildcats led 18-14 after one quarter and the game was tied 30-30 at half. But the Matadors controlled the second half, and held the host Wildcats to just 6 points for the win.

Crowell (1-2) did its damage in the air, throwing for 326 yards from Seth Bearden, while the Wildcats rushed for just 27 yards on 19 attempts. The Wildcats were led by Jemel Lanes with 224 receiving yards on 12 catches with four touchdowns. Colby Carroll had five catches for 61 yards and a score.

Crowell was scheduled to plays the Newcastle Bobcats (2-2) on Friday. the game has been canceled.

The Chillicothe Eagles (1-2) were off last week. They are scheduled to travel to Guthrie (1-3) this Friday to face the Jaguars. The Jaguars won 67-18 last week against Cotton Center.

Harrold (0-2) was off last week. They are scheduled to play the Crwoell JV on Thursday. Gametime is set at 7 p.m., but may be earlier depending on the JH  game finish time.