JoAnn Hudgins died Sept. 23 at her home in Horseshoe Bay, Texas, in the presence of her husband Tom Hudgins.For the past many years, she suffered with dementia. JoAnn Donges Thompson Hudgins was born March 18, 1937 in Elliott, Texas to the late Charles George Donges and the late Elsie Raines Donges Lemon. She and Tom met in Dallas where they married in February 1980. In the summer of 2000, they moved to Horseshoe Bay. JoAnn was preceded in death by her three older brothers, Charles, Lloyd and Curtis Donges. In addition to Tom, she is survived by sons Dale Thompson of Garland, Texas; Jeff Thompson (wife Paula) of Heath, Texas; stepson Tom Hudgins, Jr. (wife Laura) of Wall, Texas; granddaughters Jessica McFall (husband Ross) of Houston, Texas; Jennifer Fedosky (husband Jacob) of 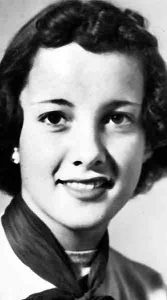 Atlanta, Georgia; and, Allie Hudgins of Wall, Texas. Pursuant to her wishes there will not be a memorial service.