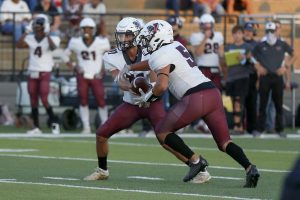 Vernon quarterback Jacob Boatman hands off to running back Christian Ochoa in the game at Burkburnett.

The Indians offense is built around running back Tallyn Welborn (6-3, 245 lb. senior). Welborn is described as a bulldozer, who loves to run straight ahead. Welborn has rushed for 896 yards and 16 TDs this season – more total yards than Vernon has amassed as a team.

Indians quarterback Rylan Smart threw for 239 yards and four scores in the same game. Zach Shepard is the top receiver, catching 7 for 164 yards against Howe.

Two weeks ago, the Indians played Canton in their closest game of the year, a 27-26 win. Welborn had 189 rushing yards and 4 scores. Smart passed for 146 yards. Sanger stopped a two-point conversion by Canton with a minute left on the clock to get the win.

For the Lions to have a chance, they will need to keep Welborn in check.

The Indians defense is susceptible to big passing plays, they gave up 414 passing yards to Lake Worth including scores of 60, 66 and 55 yards.

They are built around linebackers Creed Carter and Carson Stamper, who the coach says are “extremely aggressive.” The coach credits them with 2/3s of the team’s tackles. The Lions will need to kept them blocked at the second level to have a productive ground game.