Granddaughter Christy del Savio said “Papa got his wings and heaven got a new angel.” 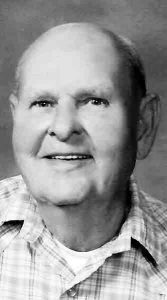 passed away peacefully on Saturday, Oct. 3, 2020 at Hospice of Wichita Falls Inpatient Facility surrounded by his family. He was 86. Don was born Oct. 1, 1934 in the Fargo Community to Winburn Crisp and Ruby Swanson Crisp. He grew up in the Northside Community, starting school in Northside and graduating from Vernon High School in 1953. He and Elnoma Odom, his high school sweetheart, married in 1953 and celebrated 67 years of marriage in June. They had four daughters: Linda, Karen, Susan, and Kelli. He was preceded in death by his parents, his sister Marie Crisp Stewart, and daughter Susan. He worked at Dabney Harvey during high school and later at Spann Automotive as an auto parts salesman. After serving in the National Guard during his high school years, he joined the US Army in 1955 and was stationed in Mannheim, Germany. Upon discharge in 1957 he and his family settled in Wichita Falls where he worked for Auto Springs. In 1968 they moved to Santa Maria, Calif. and there he learned the trade of refrigeration repair and maintenance. They moved back to Vernon in 1973 and he started his own business, Crisp Refrigeration which he operated until 1991. He and Nomie then moved to Siloam Springs, Ar. for a few years, returning to Vernon in 2000. They moved to Wichita Falls in 2018. He is survived by his wife, 3 daughters, 10 grandchildren, including Levi Edmonds and Mandy Reed, both of Vernon, and 10 great-grandchildren.He was a gentle, kind soul who loved his family and the Lord. He will be missed by all who knew him. The family requests memorial donations in Don’s name be made to Hospice of Wichita Falls, 4909 Johnson Rd., Wichita Falls, TX 76310, or at www.howf.org.The family will gather for a remembrance celebration at a later date. Online condolences may be made to the family at www.sullivanfuneralhomevernon.comDon