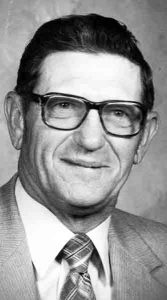 Edward Ludwig Kieschnick , 98 of Harrold, Texas died on Tuesday, Sept. 29, 2020, in Vernon, Texas.Visitation was Friday, Oct. 2, 2020 at Sullivan Funeral Home. There was a private family graveside at Wilbarger Memorial Park under the direction of Sullivan Funeral Home.Edward was born Saturday, Dec. 10, 1921 in Wilbarger County, Texas. He was the son of the late Willie Kieschnick, Sr. and the late Bertha Bodling Kieschnick. He married Sidonia Schur on Dec. 24, 1942 in Inglewood, Calif. She preceded him in death March 29, 2018. He served in the U.S. Army during WWII, South Pacifi c and Japan. He had lived in Wilbarger County all of his life. He was Board of Directors for the Elliott Gin. Edward was a member of Immanuel Lutheran Church in Harrold, Texas, where he served on several committees. He was a farmer and rancher.Edward is survived by his daughter, Judy Word and husband Don of Vernon, Texas and two sons, James E. Kieschnick and wife Barbara of Georgetown, Texas and Jerry Kieschnick and wife Dana of College Station, Texas, one brother, Willie Kieschnick, Jr. and wife Virginia of Vernon, Texas, sisters, Bernice Wiederanders of Kingsville, Texas, Jeanette Graf and husband Charles of Vernon, Texas and Ruthie Woelfel of Bryan, Texas; 8 grandchildren; 8 great-grandchildren.Memorials can be made to Immanuel Lutheran Church or favorite charity.Online condolences may be made to the family at www.sullivanfuneralhomevernon.comEdward