Monte Gene Pannell, 84 of Chillicothe, Texas, was born on April 28, 1936 in Hardeman County, Texas and died on Friday, October 16, 2020 in Crowell, Texas. Monte was a lifelong resident of Hardeman County and a member of the First United Methodist of Chillicothe.
Monte was the son of the late W.F. (Dub) Pannell and Effie Simpson (Nanny) Pannell. Monte married Dorothy Lee Spears on June 1, 1956 in Tolbert, Texas. She preceded him in death on July 1, 2013. Monte was also preceded in death by his sister, Shirley Dickinson; brother, Bill Pannell and granddaughter Heather Williams. 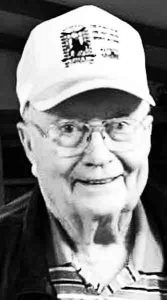 Monte is survived by his daughter, Patti; son-in-law Mark Williams, and daughter, Sheri Pannell of Chillicothe, Texas; grandchildren: Amy, husband Jodie Meek and great-grandchildren Jett, Jaxon, Ainsley and Judd Meek of Canyon, Texas. Amber, husband Payton Jackson and great-grandchildren, Abigail and Annie Jackson of Quanah, Texas. Kelsee, husband James Brady and great grandchildren Levi and Aurora of Lenore Grove Australia. Tyler Keeney of Vernon, Texas; brothers-in-law Pete Dickinson of Sugarland, Texas and Tom Spears of Mountain Park, Oklahoma and sister-in-law Betty Pannell of Aurora, Colorado. In addition to his family, Monte always included his numerous nieces and nephews as part of his extended family and cherished their many visits.
Monte graduated from Chillicothe High School, attended Midwestern State University where he received his bachelor’s degree before enlisting in the US Army. Monte was stationed in Yuma, Arizona where the Army put his love for sports to good use and assigned him to coaching.
Monte returned to civilian life and began his coaching career in Petersburg, Texas, and eventually returned home to coach at Chillicothe. Monte loved sports but finally turned to administration where he served as Elementary Principal, obtained his masters from East Texas State, and became Superintendent of Schools at Chillicothe before retiring in 1989.
Monte was a member of the Chillicothe Lions Club, the Chillicothe Volunteer Fire Department, and the Hardeman County Child Welfare Board.
Monte loved playing golf with friends and family and looking after his cows that he would hand feed daily.
In closing, Monte’s greatest gift to us was his kind, gentle way that he dealt with each of us.
Outdoor funeral service was Tuesday, October 20, 2020 at 1 p.m. at Chillicothe Cemetery under the direction of Smith Chapel, Chillicothe. Officiating was Rev. David McDonald.
Visitation was Monday, October 19, 2020 from 6 p.m. to 7 p.m. at 1115 Ave H in Chillicothe, Texas.
Memorials can be made to First United Methodist Church or Ex-students Association for C.I.S.D.