Vernon First Responders were on the scene of three separate accidents on U.S. 287 at 9 p.m. Monday. The accidents all occurred at overpasses  and were due to ice-covered roads.

U.S. 287 northbound was closed at College Drive after a U-Haul ruck with trailer flipped onto its side and blocked traffic. Traffic had backed up more than a mile, as vehicles were being diverted to the Frontage Road.

Wilbarger is under an ice storm warning until 1 p.m. Wednesday, as three separate waves of ice are expected to hit the area. 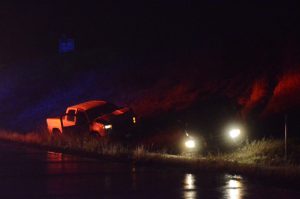 A two vehicle-accident occurred in the ice Monday at around 7:45 on U.S. 287 at the Laurie Street overpass.
Daniel Walker/Vernon Record