Traffic was slowed on U.S.287 and one northbound lane closed Monday night. A semi pulling a Mayflower trailer caught fire and was fully engulfed in flames at around 8 p.m. Monday night. The incident occurred on U.S. 287 near CR 93 north of Vernon. Vernon Fire Department personnel were on scene fighting the fire, which spread into the adjoining median. Texas Department of Public Safety troopers were also on scene.

The incident is under investigation 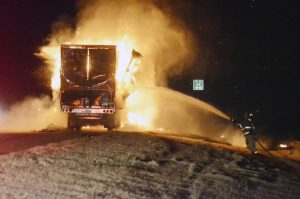