Jeanne Price Nowlin passed away in Ascension Providence Hospital, Waco, Texas, after succumbing to COVID-19 and other medical problems on December 22, 2020. Born on March 27, 1946 in Waco, she was the daughter of Dan and Jeanne Nowlin of Vernon, Texas. Surviving family members include her sister Kay Nowlin Brown and husband Mike Brown of Vernon, her nephew Daniel Brown and wife Amanda of Vernon, and niece Kathryn Brown Horner and husband Mitchell of Waco. She was also proud of her great- nieces and nephews Madeline, Karoline, Jacob, Samuel, and Rhoads. A 1964 graduate of Vernon High School, Nowlin earned a 1968 Bachelor of Arts in Education from Baylor University, where she played on the Lady Bear basketball team and ran track. She completed a Master of Arts in Edu 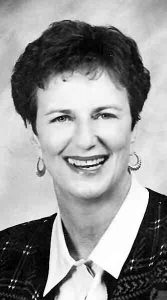 cation from North Texas State University in 1973. Gifted with athletic abilities, she was a coach and teacher in the Dallas Independent School District. She loved a challenge and was persuaded one year to coach the 6th grade boys football team who won the city championship under her leadership. Also, she was an administrator in the Richardson Independent School District. She began her Baylor career in 1988, in the Baylor Athletic Department as an Associate Executive Vice President of the Baylor Bear Club. In 1992, she became the Coordinator of Baylor Women’s Sports and was named Assistant Athletic Director in 1994. She was promoted in 1997 to Associate Athletic Director which included supervising the women’s sports of soccer, volleyball, basketball, softball, tennis, golf, and women’s track. She also served as Baylor’s Senior Administrator and Liaison for Women’s Athletics to the Big XII Conference from 1997 to 2001. In 1989, Nowlin was responsible for organizing and developing the Baylor Women’s Athletic Cabinet, a network of volunteers who promoted women’s athletics at Baylor. She was directly involved from 1989 to 1995 in organizing and promoting fundraising events for women’s athletics. These events included golf and tennis tournaments, walk-a-thons, basketball, and volleyball tournaments. In 2003, she served as Assistant Director of the Baylor Bear Foundation, where she was instrumental in raising funds and adding and serving high-end donors as members of the Foundation. After her Baylor retirement, she continued to live in Waco and support Baylor Athletics until her death.Memorials may be made to Jeanne P. Nowlin Endowed Athletic Scholarship Fund in Women’s Basketball-425SEFT; Baylor University, One Bear Place #97050, Waco, TX 76798.A memorial service will be held at 11 a.m. on Saturday, March 27, 2021, her birthday, at the Central Christian Church of Vernon.