William (Bill) Curtis Lowery of Vernon, Texas, returned home to his Father in Heaven on Sunday, Dec. 20, 2020. Bill was 73 years old.Bill was the only child born to godly parents, John William Lowery and Clarice Gladney Lowery, in Lubbock, Texas on July 17, 1947. Bill started his military career early, leaving home as a high schooler to attend A 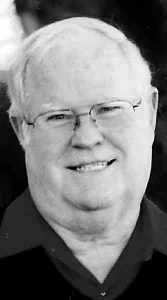 llen Academy in Bryan, Texas where he met friends that he remained close to throughout his life. Bill started college in Boulder, Colo. at Colorado University where he was the fi rst live Buffalo trainer for Ralphie the Buffalo, a donation to the University from his father, John. After a year of riding horses and playing with Ralphie, Bill transferred to Texas Tech back in Lubbock. Bill graduated from Texas Tech University with a Bachelor’s degree in Economics and started his military career as an offi cer in the United States Army and was assigned to the Medical Service Corp.Bll was stationed in Germany when he started corresponding with the love of his life.On his way home from Germany, Bill stopped in New York City to meet Claudette Palka. Bill continued to date Claudette while he attended Syracuse University where he earned his Master’s degree in Business Administration. Bill proposed to Claudette on the top of the World Trade Center in NYC, and they were married in Niagara Falls, N.Y in 1978. They were blessed with two children. They were stationed at Ft. Detrick, Maryland, Ft. Sam Houston, Texas, Ft. Hood, Texas, and Ft. Sill, Oklahoma where Bill retired from the Army as a Lieutenant Colonel.After his retirement from the Army, Bill worked as the Hospital Controller for Madison County Hospital (now St. Joseph’s), in Madisonville, Texas for fi ve years. Bill then worked as the Chief Financial Offi cer for Wilbarger General Hospital, served as a Hospital Controller for Lincoln County Memorial Hospital in Ruidoso, N.M. then served as the Chief Financial Offi cer at North Texas State Hospital in Vernon, Texas for10 years before retiring for good. After his retirement, Bill served as a member of the Wilbarger General Hospital Board for three years.Bill was a devoted husband, loving father, and proud grandfather. Bill never met a stranger, befriending all that crossed his path. With a heart for giving, he was always there for a friend in need. As an Army veteran and a member of the Church of Jesus Christ of Latter Day Saints, Bill embraced the concept of serving others, living life as an active participant in every community in which he lived. Since 1997, Bill served as the Branch President for the Vernon Branch of the Church of Jesus Christ of Latter-Day Saints off and on for 18 years. Bill was also active in the Boy Scouts of America.Bill was preceded in death by his parents, John William Lowery and Clarice Gladney Lowery of Lubbock, Texas. Bill is survived by his wife, Claudette Palka Lowery of Vernon, Texas, son, John Curtis Lowery and his wife Natalie Lowery of Tucson, Ariz., daughter Bridgette Lowery Reeves and her husband Patrick Reeves of Vernon, Texas, granddaughters Presley, Allie, and Baby Girl Lowery due in January 2021, and grandson Brock Lowery of Tucson, Ariz.. Bill loved his in-laws and is survived by brother-in-law Henry Palka and his wife Mary of Lewiston, N.Y, sister-in-law Judith DiVita of Carolina Shores, N.C., and and sister-in-law Bernadette Bagovich and her husband Tom of Lewiston, N.Y. Bill was close to all of his aunts and uncles, and is still survived by his father’s sister, Esther Smith Wilkinson of Fresno, Calif. Bill wasa loving uncle to several nieces and nephews. Bill was an only child but loved his cousins like they were his siblings.Visitation was Sunday, Dec. 27, 2020 from 3 p.m, to 5 p.m. at the Sullivan Funeral Home. Funeral services were Monday, Dec. 28, 2020 at 11 a,m. in the Sullivan Funeral Home Chapel. Interment will be Wednesday, Dec. 30, 2020 at the Fort Sill National Cemetery in Elgin, Okla. Services will be available to view through the following Zoom link : https://us02web.zoom.us/j/88698746205?pwd=Y2UwY29vdHNxZTNONC9QY2Z3UmRmQT09 and through Facebook Live via the Facebook account of BridgettePatrick Reeves.Due to COVID precautions, in lieu of fl owers, the family has asked that donations be made to the Wilbarger General Hospital Foundation, 920 Hillcrest Drive, Vernon, TX 76384, or the North Texas State Hospital’s Volunteer Service Council, 2201 Main Street, Vernon, TX 76384.Online condolences may be made to the family at www.sullivanfuneralhomevernon.com.