Richard “Ricky” Futch, 74 of Seymour, passed away Tuesday, Jan. 19, 2021 in Seymour.Graveside services were held at 11 a.m. on Friday, Jan. 22, 2021 in the Masonic Cemetery with Dr. David Warren officiating. Services are under the direction of Archer Funeral Home, Seymour, Texas.Ricky was born July 27, 1946 in Wheeler, Texas to Junior and Vallie Harris Futch. He attended school in Estelline and graduated from high school in Vernon. Ricky married Connie Carter on October 14, 1967 in Ver 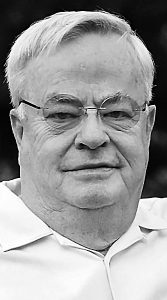 non. He worked as a station manager and pipeline inspector for Shell pipeline, retiring in 1992 after 25 years with the company. Ricky owned Seymour Gun Shop and was the creator of the Futch Buckles. He was an accomplished silver smith and gun smith.He was a member of the First Baptist Church. He was preceded in death by his son, Michael Shane Futch on September 23, 2011 and a brother, David Futch.Survivors include his wife of 53 years, Connie Futch of Seymour; a son, Ty and Amanda Futch of Seymour; a daughter-in-law, Jodie and Dusty Odom of Seymour and 5 granddaughters, Caroline, Brecklyn, Norah, Libby and Ellery.Richard ‘Ricky’ FutchPaid